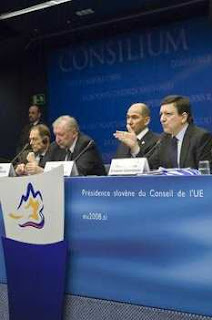 As the credit crisis engulfed the 85-year-old Bear Stearns investment bank and the Federal Reserve with JP Morgan Chase combined to provide emergency finance, there are very real fears of an economic meltdown engulfing the global financial system.

Unfounded or not, we would still like to think that there is someone in charge on this side of the pond, with sufficient gravitas to handle any emerging crises, and to reassure us that the best possible action is being taken.

According to a gushing Paul Kirby, he of the BBC, the EU has stepped up to the plate, with EU commission president José Manuel Barroso telling a post-European Council press conference that, "the EU has passed the reality test".

For the 27 leaders of the EU member states, the challenge of the Brussels summit was the urgent demands of climate change and instability in the world's financial markets. And such is their grip on the situation that Barroso manages to be "upbeat" on the response so far to the financial turmoil.

"There is a real reason for confidence in our ability to weather the storm," he says, praising the actions of the European Central Bank since the credit crunch arrived in autumn 2007.

The member state leaders decided the main responsibility for dealing with the problems lay with the private sector. But the EU, says Barroso, was ready to "take regulatory and supervisory actions" when it had to. 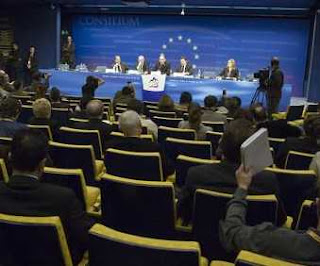 Like him or hate him – I'll let you guess which we do – you have to concede that Barroso sounds like the leader of a government – which indeed he is. And if you measure the width rather than the quality – the theatre set in Brussels, staged for the press conference, is highly impressive.

On this side of the Channel, as we cast around for leadership in what are uncertain times, we happen on The Daily Mail which publishes a piece on David Cameron, which starts off:

Gordon Brown is reeling from a string of disasters, the economy is in trouble and the Bad News Budget left a question mark over Government competence. So why aren't the Tories doing better? Polls show the party consistently ahead, but David Cameron is under pressure to establish an election-winning lead. 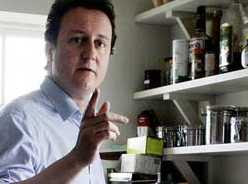 The answer is possibly that, while the "grown ups" in Brussels - however wrongheaded they may be - are talking about "the urgent demands of climate change and instability in the world's financial markets", Mr Cameron is talking about this.

Do we really want a leader of the opposition, at such a grave time, concentrating on such matters as parental leave, even making that the centrepiece of the Tory Spring Conference?

If he stepped outside his own particular bubble, he might realise that rather more people are concerned about too much parental leave as their jobs disappear from under them, and they are forced to while away their time at home, surviving on unemployment benefit.