The Times gets the point 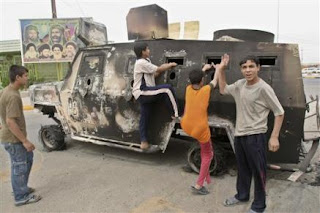 It is interesting how, when the real world intrudes, how petty and inconsequential the European Union really looks. With Sarkozy playing politics with defence, the more important issues are highlighted by The Times which today offers a piece headed: "Iraqi militia success means Britain must fight – or admit failure".

Written by Richard Beeston, the foreign editor, he tells us that the battle for Basra now raging on the streets of Iraq's second city shows every sign of turning into a nightmare for the dwindling British forces based near by.

The thesis is very much as we outlined in our earlier piece, noting that, if the Iraqi offensive fails, it may be necessary to reinforce the British contingent. The only other option, Beeston writes, "would be for Britain to admit finally that it has lost the fight in southern Iraq." That, he says:

…would mean an ignominious withdrawal and handing over control of Basra to the Americans, who grudgingly would have to take over responsibility for the south. As American officers and officials have privately made clear, much of today's problems in Basra can be traced back to Britain's failure to commit the forces necessary to control Basra and southern Iraq in general.

What is bizarre about all this is that, while President Bush judged the situation in Basra as serious enough for him to make an early statement, as far as we can see there has been no official statement from Gordon Brown – not even the leader of the opposition. Any idea that there might be a crisis in Iraq – in which the British government has a direct involvement and for which it is largely responsible – seems to be totally off the political radar.

Already, we are hearing that coalition forces are providing air support, although there seems some confusion in the media as to whether British or US assets are being used.

With the insurgents quite obviously giving the Iraqi Army a run for its money – the picture (top left) shows a burnt-out a Polish-built Dzik 3 APC, which the Iraqi forces paraded with such pride at the beginning of last year. This sad wreckage, in a way, is symbolic of the dashed aspirations, ironic given the latest MoD puff which shows British Warriors escorting two Dzik 3s (above).

It does not seem to us that Gordon Brown can remain forever in denial. Sooner or later, he is going to have to make his government's intentions clear.