Coming in the "back door" 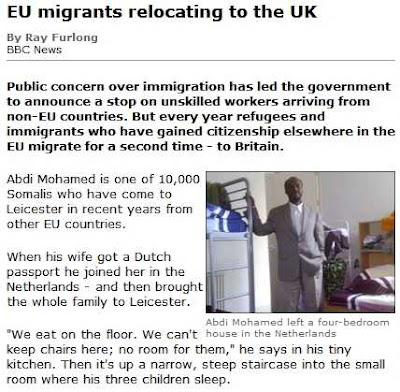 In a previous post we noted how – even though it had opted-out of the common immigration policy – the UK was "tweaking" its own to bring it into line with EU laws, in order to prevent the UK becoming a "back door" for the rest of the EU.

However, it remains the case that, once a third country immigrant has entered any member state and managed to qualify for citizenship of that country (usually after five year's permanent residence), they also become "EU citizens". As such, Directive 2004/38/EC applies. They then enjoy "freedom of movement" and "freedom of establishment" and can move to any other member state - such as Britain - where they cannot be prevented entry.

After a qualifying period of residence in Britain, they can then apply for British citizenship (not that they need to, as they have absolute rights of residence). The authorities cannot refuse them – even if, had they entered directly from their original third countries, they could have been turned back on arrival. Furthermore, under the terms of the Directive, they can then bring their spouses, their children, their own parents and their in-laws, and even cousins if they are dependants.

And this is exactly what is happening. According to the BBC:

Public concern over immigration has led the government to announce a stop on unskilled workers arriving from non-EU countries. But every year refugees and immigrants who have gained citizenship elsewhere in the EU migrate for a second time - to Britain.

It seems that the other member states are somewhat less concerned about our sensibilities. Read the rest of the report here - it really does make a nonsense of our "opt-out".