The elements of propaganda 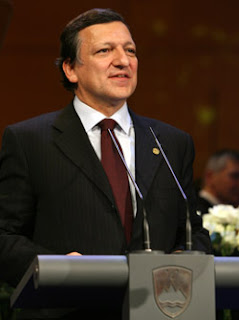 We notice that the head of our government is given his own column in The Daily Telegraph business section today – none other than José Manuel Barroso.

"Empowering consumers for a fairer Europe" is the title of his piece and is something of a coup for the commission. It is a central part of its strategy to present the European Union in a more favourable light, which we flagged up in June 2006 and followed through with this piece and this.

Of course, the best kind of propaganda – as we have occasionally observed – is the type that is not immediately recognisable as such. The Barroso piece fails on that score, but I wonder how many people – not least in The Telegraph - realise that it is part of a deliberate, long-planned strategy.

The particular evil of this is that the downside is never mentioned – the overall cost of EU regulation, estimated 12 percent of GDP - a cool £600,000,000,000 year. Stress the upside and ignore the greater downside and you have all the elements of propaganda.