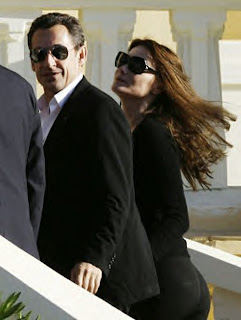 The sigh of relief that greeted the defeat of his Socialist opponent … last year can only last so long. It's nice to have been spared the worst. But it doesn't make you enjoy the simply bad.

Actually, it is a ferocious analysis of what is wrong with Nicolas Sarkozy and how he has managed to squander the hopes invested in him just a few months ago. The article is by Pierre Briançon, a distinguished French journalist, at present the Paris correspondent of BreakingViews.

We have already written about the first round of the French local elections and about the predictable and widely predicted losses Sarkozy’s Union for a Popular Movement (UMP). The second round, this Sunday, was no better from their point of view.

Ten months after Nicolas Sarkozy won the presidential election, his UMP party and other conservative allies received around 47.5 percent of votes in municipal elections on Sunday, March 16. The Socialists and the small parties close to them brought home about 49 percent.

The conservatives lost their strongholds of Toulouse and Strasbourg, and upsets in Reims, Amiens and Caen, routed conservatives and centrists from mayoral positions. In Perigueux,Education Minister Xavier Darcos lost his bid for reelection as mayor by around 100 votes.

Paris Mayor Bertrand Delanoe, a Socialist, handily won reelection with 57.7 percent of the vote. The left-wing mayor of Lyon also defended his seat.

Ségo’s reaction, echoed by many Socialists, shows that the woman has remained as clueless as she has always been. It is not the injustice of those reforms that has riled the French but their non-existence in reality as opposed to the threats.

The turn-out of 54 per cent was lower than that of the previous week and shows that a sizeable proportion of the population remains unprepared to vote Socialist even if they are dissatisfied with the right. Local and regional elections in France matter a great deal more than here, as there is real power of patronage, if nothing else, attached to the positions.

Sarko’s response to the defeat was also predictable. He and his ministers vowed to carry on with the reform, which is good to know, though starting them might be an even better policy. Much depends on whether he will start or continue with his reforms despite the various opinion polls that seem to suggest the opposite.

An opinion poll by the BVA polling institute showed 63 percent of those questioned judged the government's economic policies bad or very bad, against 58 percent a month ago.

The poll also found that 51 percent thought he should adapt his policies to reflect the concerns of voters over social issues and the need to protect services, against 40 percent who wanted faster reforms of pensions and public finances.

To show that he is serious Sarkozy made some minor changes to his Cabinet and assured the voters that he would change his style.

M. Briançon, with whose article I started this posting is unimpressed:

Nicolas Sarkozy has wasted no time showing that he has misunderstood the resounding defeat of his conservative party in last Sunday's municipal elections. He's reshuffling the presidential staff, bringing in a few fresh and irrelevant faces as junior cabinet members, and promising to "change style" -- by which he means, presumably, that he will not marry again, will stop wearing tacky shades and won't have his jeans ironed any longer.

But the French president is kidding himself if thinks the main problem in the first eight months of his term has been style, not substance, communication and not policies. His flashy ways and cool new wife only became problems once the French realized that the chance for serious reforms was slowly being squandered while their president was basking in his new-found happiness.

Truth be told, nothing much has happened in France since Mr. Sarkozy was elected on a promise of "rupture." Reports have been commissioned and ignored, ministers have been infantilized and silenced, while the president has faked action on all fronts, talking here and insulting opponents there with expletives no U.S.-based newspaper could print.

But true reforms have been rare and few. The Sarkozy administration has made a few commendable inroads on topics that were long considered taboo. But their limited scale gives an idea of what passes for reform in France these days. Train conductors have been asked to retire at the same young age (60) as anyone else, and not ten years earlier.

State-owned universities have been granted some degree of autonomy that might allow them, down the road, to -- heaven forbid -- compete with each other. Neither the job-killing 35-hour week nor the populist, so-called wealth tax have been abolished, though their most absurd consequences have been curtailed by creating major loopholes.

Are we to understand that the French President is all style (good, bad or indifferent) and no substance? Mais c’est épatant.
Posted by Helen at 16:32