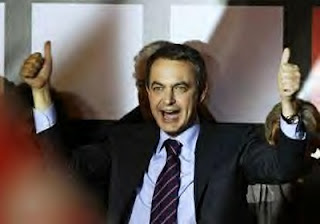 The Socialists are back in government in Spain, despite the slumping economy and various other problems. The last-minute shooting of Socialist politician Isaias Carrasco may well have added to the vote though Zapatero has been accused of conducting negotiations with the terrorist group.

The conservative Popular Party under Mariano Rajoy actually picked up more seats than the Socialists did and managed to come close in the popular vote.

With 92 percent of the vote counted, Zapatero's Socialist party had 43.8 percent compared to 40.1 percent for the conservative Popular Party, according to the Interior Ministry.

This means that Zapatero has not got an outright majority and will have to form a coalition with one of the small regional parties. Negotiations are about to begin.

The likelihood is that Señor Rajoy will be pressurized into resignation, having lost two elections to Zapatero.

The election campaign was vicious to put it mildly and there is some apprehension that the bad feeling will continue beyond it, though it will quite possibly turn into a general dissatisfaction with the government as the economy slows down even more and ETA, possibly, continues its murderous campaign.

Prime Minister Zapatero has promised to “govern with a firm but open hand”, whatever that may mean.

In Malta, whose Prime Minister is also part of our government, things are a little less clear-cut. The Herald Sun reported that the ruling conservative Nationalist Party won by just 1,200 votes. But, according to Reuters it is still a little hard to work out what happened. With that narrow a margin on a 93.3 per cent turn-out (apparently, low by Maltese standards) that is hardly surprising.

Meanwhile in France the electorate has shown its disenchantment with Sarko in the local elections. Although, as the Times points out, a good deal of the voting in the “36,000 town and village councils” is on local issues, a noticeable proportion of the electorate made it clear “that they aimed to use their ballots to punish Mr Sarkozy”. Then again, 10 per cent said that they were using their ballot to support him.

Regional and local politicians in France have a great deal of power and many of those politicians are also national ones, it being within the rules for French politicians to hold two jobs simultaneously (though not three).

The Socialists have done well in this round of local elections with the second round coming next Sunday.

The Left captured Rouen outright and a string of conservative-governed cities, including Marseilles, Toulouse, and Strasbourg, were in danger of falling to Socialist control in next Sunday's run-off.

Socialist leaders called the local voting a blow to the radical conservative President whose popularity has slumped since he won a triumphant election last May. Despite feuds that have racked their party, the Socialists won 47.5 per cent of the overall vote for the country's 36,000 municipal councils, with Mr Sarkozy's Union for a Popular Movement (UMP) winning 40 per
cent.

Paris and Lyons, the two biggest cities, appeared certain to remain in the hands of the Socialists, who won them in 2001.

A bright spot in an otherwise bleak evening for the Right was the outright election of Alain Juppé, former UMP prime minister, as Mayor of Bordeaux.

The Prime Minister pointed out that the leftward swing was not nearly as bad as predicted and called on UMP supporters to reverse it in next Sunday’s round.

For all of that, this confirms that President Sarkozy is not making the best of his victory last May and his personal popularity has slumped very seriously. It was well-known that members of his own party who were fighting in their various local constituencies asked him to keep away and he left the Prime Minister, François Fillon, to lead the campaign.

President Sarkozy intends to open “chapter two” of his presidency after the local elections and many are hoping that this one will have less about him and more about France.

In the meantime, the Socialists, despite today’s succes, continued to feud with a bitterly contested leadership election due in the autumn.
Posted by Helen at 00:26