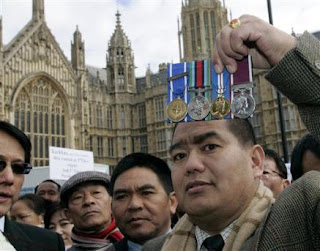 When I get it wrong, you have to concede that I do it in style. Having lambasted all and sundry for not taking account of Directive 2003/109/EC as an explanation for the government's treatment of the Gurkhas, I discover to my chagrin that the Directive does not apply to the UK.

The directive is subject to one of those famous "opt-outs" negotiated in the Amsterdam treaty. This means that the UK, along with Ireland and Denmark, has chosen not to implement the law.

However, that does not seem to be the end of the matter. Although, in this instance, this directive does not apply, the action taken in respect of the Gurkhas so closely matches its provisions that the fact that it does not apply makes no practical difference.

What seems to be behind this is something rather more subtle, but still heavily influenced by the European Union. Over term, the UK itself has been progressively revising its own immigration law and, in a number of instances, it has tightened up entry requirements in such a way that provisions end up being either the same or more rigorous than the EU requirements.

In no case can we find a situation where the UK has relaxed requirements to make entry requirements for third country nationals easier than prevail in the member states which have adopted 2003/109/EC.

There is some logic in that as, once immigrants become naturalised British citizens, they also "enjoy" all the treaty rights granted to the individual as "European citizens", including freedom of movement and freedom of establishment, plus all the rights set out in Directive 2004/38/EC.

It does not take any great leap of imagination to surmise that, if the restrictions imposed on third country nationals entering the UK were less than in the rest of the EU member states, then the UK would become a "back door" (or be regarded as such) for entry to the rest of the EU. One can also then imagine that the pressure on the UK to abandon its opt-outs from the "colleagues" would be so great as to be irresistible.

Without there having been any open declaration to that effect, therefore, it seems that the UK, while maintaining the fabric of the opt-outs in position, is effectively adopting the main provisions of the EU, or going further than the law actually requires.

Certainly, this resolves some of the anomalies arising from the UK's present position, and leaves open the options to opt-in en masse to the current provisions, which seems to be the government’s eventual intention. This document explores that issue.

Thus, while the government is not strictly bound (de jure) by the provisions of Directive 2003/109/EC, it is actually abiding by the full rigor of the provisions. This smells of a deal in les couloirs - typical of the underhand way the UK operates in the EU, and would explain why the government is putting itself out on a limb politically, to exclude the Gurkhas in such an extraordinary fashion.
Posted by Richard at 22:15