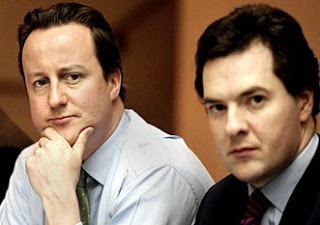 Despite the euphoria at the rising fortunes in the polls of the Conservative Party, reflected – quite understandably in the Conservative Home site - the relief may be short-lived if the sentiments expressed in The Daily Telegraph leader are any guide. It opines:

At a time of almost unprecedented economic uncertainty, the electorate expects to turn to the country's political class for some indication of clear coherent leadership. When global instability coincides with a widespread loss of confidence in the government of the day, opposition parties have a responsibility to offer genuine alternatives to what voters believe to be inadequate or wrong-headed policies.

To fail to rise to that challenge is not simply to commit a self-defeating mistake: it is to devalue the democratic process, which must offer voters a real choice if it is to be meaningful. The Conservatives appear to have decided, for what they quite shamelessly describe as short-term electoral advantage, not to present any consistent systematic rebuttal of the tax-and-spend economic philosophy espoused by the Labour Government.

Let it be said here that we defer to no one in our wish for a change in government, and for a robust, successful Conservative Party to take the reins of power. But, obsessed as it is with short-term electoral tactics, we do not see in the current Parliamentary Party anything of the leadership that this nation needs in a time of crisis.

We would like to be wrong and fervently hope we are – but we are unable to divine from the Conservative's response (or lack of it) to the current economic crisis anything which would hold out the hope of a change in administration leading to a better, more certain future.

That is not to say that the current administration is any better – far from it. But the electorate deserves a more than a choice between the lesser of two evils, and the Conservatives have no right to expect our votes simply because they are less worse than the alternative.

In that context – as a "candid friend", if you like – we want to see in Mr Cameron and his shadow team, a powerful, effective leadership that can inspire confidence and lead the nation through what are undoubtedly going to be dark times.

We are, unfortunately, still waiting.