Where buffaloes fear to tread 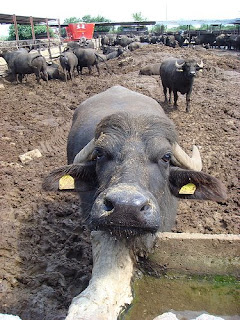 Despite the commission’s intervention, the Italian waste crisis simply will not go away. The latest development is a contamination scare over mozzarella cheese. Made from vulcanised buffalo milk, it seems that high levels of dioxin have been found in samples from 29 mozzarella makers, attributed to illegal dumping of toxic waste in Campania.

This is the region, as we have reported before where the local branch of the Mafia are in charge of sanitation and where the capital, Naples, has resorted to burning rubbish in the streets following the breakdown of waste collection and disposal system.

The source of the contamination is yet to be proved but the working hypothesis is that the buffalo have been feeding off land contaminated by waste.

Fortunately, most of the buffalo mozzarella produced in the region is consumed locally although, of the 33,000 tons manufactured, some 16 percent is exported, mostly to European countries but also to Japan and Russia. The bulk of mozzarella consumed in Britain, however, is made here, so we need not be troubled by Italian hygiene standards.

Yet, even now, Neapolitan military and civilian authorities are still struggling to cope with the city's rubbish crisis. Residents are being told to keep all but the most perishable rubbish at home over the Easter holiday to prevent the city's dumps being overwhelmed once again, with waste spilling onto the streets.

It says something for this nation – that has quit Iraq and is nowhere to be seen in Afghanistan - that a General, Franco Giannini, has been appointed as one of the heads of a special rubbish task force set up earlier this year by Romano Prodi. Yet, even the power of the military mind is unable to prevail over the mafia, and the poor man is left pleading with householders not to put their rubbish out.

Are we really supposed to take these people seriously?