A customer has spoken 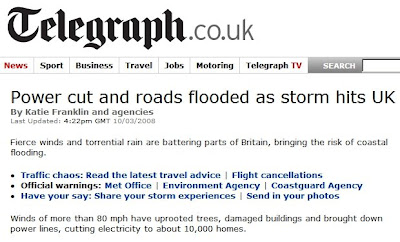 The headline on posting (reproduced above) on the Telegraph website yesterday brought a wry smile. We woke that morning in the frozen north to a bright, calm day, warm with only the slightest hint of wind. Later that day, we had a small amount of rain and something of a breeze, but nothing exceptional.

The voluble message conveyed by the headline, of course, is the order of priority and importance attributed by the newspaper to certain events. Primarily London-centric, its interests then radiate out to the south and west of England (where many of their correspondents live) and then only to wider fields. Thus, something that affects the lower portion of the UK is, as far as the paper is concerned, something which happens to the whole of the UK.

Overlaying this is another tendency of the paper, a malaise affecting the whole of the media industry – the tendency to indulge in the hystérie du jour to obsessive length, ditching all other news as if nothing else mattered.

In today's newspaper, we get the two phenomena combining. For what is a local, or at best a regional issue – and not a very important one at that – we get the main front page story devoted to it, and then the whole of pages two and three. What other stories, one might ask, were spiked in order to accommodate this obsession.

Turning to another issue, we also got a story about a tragic parachuting accident which occasioned the death of a promising young SAS Captain. We will deal with this, when we have time, on our Defence of the Realm blog – and the related issues - but the point of concern here is the way the newspaper uses the story to promote a wider agenda.

The theme here is the failure of "government" to provide the right (or enough) equipment for our troops – a worthy enough cause – but tucked into the text, in a classic example of "cut and paste" journalism, is an extraordinary claim concerning the death of another Captain, as follows:

Only last month, Oxfordshire coroner's court dealt with the inquest of Captain James Philippson, 29, who was killed after British troops were "totally out-gunned" in a battle in Afghanistan on June 11, 2006.

The claim is extraordinary because, quite simply, it is not true – it does not even approach the truth, and demonstrably so. We dealt with this issue at length in our sister blog and I commend it to you as a classic example of how the truth gets utterly distorted in the hands of the media, that distortion then repeated ad nauseam.

By way of a summary, the incident which gave rise to this soldier was thoroughly explored by an official Board of Inquiry which concluded that the firepower available "was sufficient for dealing with the enemy action", that a shortage of machine guns – occasioned in part by the neglect of the patrol leader - would only "have allowed a swifter extraction from the killing area", and in no way contributed to the death of Captain Philippson.

All of this and much more has got me thinking. Even with my relatively modest purchases – one daily newspaper and two on Sunday, and the occasional additional paper – I spend £500 a year. It is not much, but it is a significant sum and one which I would spend willingly if I thought it provided value for money.

Over the years though, more and more of my "news" comes from the internet – costing £9.99 a month as opposed to £10 a week for the limited and distorted service supplied by a newspaper. One seriously wonders whether it is worth it. But not only do the newspapers no longer provide value for money, there is the opportunity cost. That amount of money could be spent on better things.

Struggling with that concept, I have to admit that I have had enough. From tomorrow, I am no longer going to buy a daily newspaper, breaking the habit of a lifetime. But enough is enough. Something has to be done about the media and, if the "customer is king", a customer has spoken.