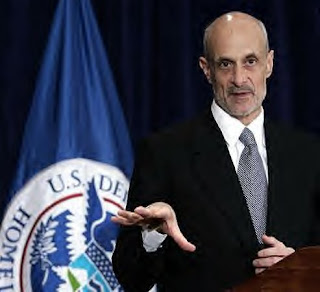 The European Commission and the Russian government (prop. Vladimir Putin) have at least one thing in common. They both get very annoyed with those uppity Balts. Those tiny countries do have a habit of tweaking the big cats' tails.

While the European Commission has been solemnly negotiating with the United States a visa-free agreement with the member states of the EU, many of whom already have those agreements, Estonia has broken ranks, to be followed by Latvia.

As AP reports Estonia and the USA have signed a visa-waiver agreement during Michael Chertoff's visit there and his next stop was Latvia for a similar purpose. The Commission is unhappy and Homeland Security Secretary Chertoff has been making mollifying noises.

Chertoff played down claims that the issue had created tension within the EU and stressed that the United States was being "mindful and respectful" toward Brussels in the matter.

"We want to in every way respect our obligations to the European Union," he said. "Our law requires to accept each country (into the visa-waiver scheme) individually. I think this is what we call a win-win situation for everybody."

The current program allows citizens from most West European countries to enter the U.S. without visas. However, it excludes Greece, the Czech Republic, the three Baltic states and other East European nations except for Slovenia.

As so many countries already have an agreement what is the point of the Commission negotiating, particularly as Chertoff is intending to sign agreements very soon with Hungary, Lithuania and Slovakia?

Some of the problems lie with certain conditions that the USA is making.

The U.S. wants air marshals on flights and electronic travel authorization as part of a new visa waiver law that could also require EU nations to provide more data on passengers on trans-Atlantic flights — demands that have irked EU officials.

Over and above that there is a difference in approach to negotiations. The United States, as Michael Chertoff said, negotiates with individual countries and clearly does not consider the EU to be one. The EU wants a negotiation that will encompass all 27 members. As some of them are countries with whom the US does not want to have visa-free agreements, those negotiations are likely to get very bogged down, indeed.

The compromise solution seems to be parallel talks - with the EU and with individual states. We all know which ones are likely to lead to any results.
Posted by Helen at 23:42