Under their very noses 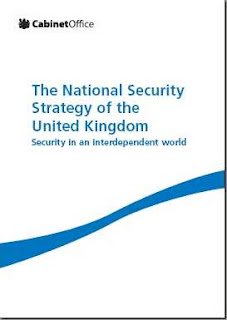 One of the few benefits of running a blog is that we can choose our own subjects about which to write – or not. Mostly, we choose not. That is the one luxury not afforded to working hacks who, come what may, must write on the hystérie du jour, as defined by their masters.

Such a fate befell those unfortunates who were charged a few days ago with writing on the government's long-waited National Security Strategy. In a space of a few hours, they had to gut a 61-page document and somehow make sense of it.

Most of course did not even try, relying on reporting the prime minister's speech to the Commons. Thus we get this effort in The Times, which gives the highlights and makes a credible enough story, although the lack of detail leaves the reader no further forward when it comes to knowing what the policy is really about.

It is then usually – or, at least, traditionally - left to the Sunday journalists to take a more critical look, with the benefit of a few days of analysis. As befits this modern branch of the entertainment industry, however, few seem to have bothered.

One notable exception is Alasdair Palmer in today’s Sunday Telegraph who concludes that it is a "strange document". The closer you inspect it, he writes:

…the more the strategy appears as a way of deflecting attention from the real threats to national security and the Government's failure to tackle them. That impression is reinforced when you read its proposals for dealing with the threat of increased flooding - which do not include stopping the construction of new houses in flood-plains prone to inundation. This not a strategy for dealing with security. This is an attempt to pull the wool over the electorate's eyes.

Having decided over the weekend also to review the strategy – also taking advantage of those few days to undertake the analysis, Palmer's input is more than a little helpful. It crystallises our own thoughts about a document which, with the best will in the world, is difficult to get a handle on – trying to bottle smoke would be easier.

It is, in effect, a series of statements of the bleedin' obvious, re-statements of existing policies and an overarching framework of "guiding principles" which is so general as to be almost meaningless.

However, perhaps the most important thing this document does is underline the complete disconnect between official thinking and the political reality that this government is shaping.

This central flaw is articulated in the government's "set of core values" where it tells us they include "legitimate and accountable government". As it then goes on to tell us that one of the best ways of promoting security is to support those values, the paradox is obvious. The single biggest positive driver of security within and between states, it intones, "is the presence of legitimate, accountable and capable government operating by the rule of law."

At this point, it would be easy to walk away from the whole document, dismissing it as something that is so far out of touch with reality as to worthless. In fact, that is the case. The document espouses a "rule-based approach led by international institutions" while retaining the option to act unilaterally. It dismisses the prospect of an immediate threat to the UK but concedes it could happen in the distant future and, consistently, it tells us that the various general threats it identifies are "interconnected" – no less than three times on the first page.

The one thing it has not done, though, is make the connection between our own government's destruction of democracy and national security. It lives in a fantasy world where our masters look around at everything under the sun to identify potential threats yet they cannot see what is under their very noses.