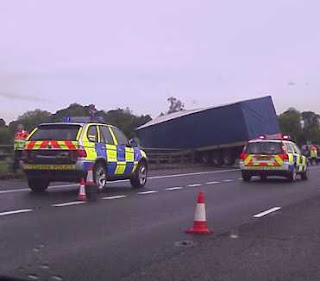 The Daily Mirror and other newspapers are trailing a documentary to be shown tonight on ITV1, called: Killer Lorries.

The programme claims foreign lorry drivers are breaking UK safety laws and risking lives. They are three times more likely to have a crash than local truckers. In 2006, 1,322 people were hurt and 44 killed by trucks from abroad, and accidents are up 50 percent in five years. Their drivers are four times more likely to drive while tired but police are powerless to prosecute.

The programme, we are told, interviews Chief Insp Phil Hibbert, who says: "We would like to see an extra provision for us to be able to fine lorries at the roadside."

Of course, this is absolutely nothing new – and is a subject we have raised on this blog. It was also raised last year by The Times. Hundreds of people have now died unnecessarily and thousands more have been injured, yet the reason nothing has been done is because controls which discriminate against foreign truckers run contrary to EU law.

So, while the DfT sits idly by on this, it is interesting to note its new-found enthusiasm for tightening up drink-driving laws, all on the rather dubious proposition that it could save "up to" 65 lives a year.

It would thus seem that saving lives is a somewhat selective concern. "Europe" will only permit such life-saving measures if they further the interests of European integration, which gives "dying for Europe" a whole new meaning.