The death of parliament 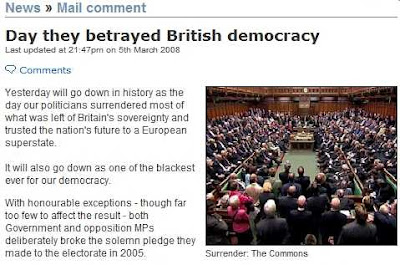 The Daily Mail puts it somewhat luridly, with the headline, "Day they betrayed British democracy", then declaring, "Yesterday will go down in history as the day our politicians surrendered most of what was left of Britain's sovereignty and trusted the nation's future to a European superstate."

We would prefer to say that the these politicians have surrendered another tranche of their powers to a super government, rather than state. But that – in this particular context – is pedantry. The term "surrender" is perfectly adequate, and it truly represents the tawdry performance of that motley lot we watched today.

For that reason, we concur with the Mail's view that:

What we witnessed last night was the political class ganging up against the voters who gave them power… Is it any wonder that more and more Britons are losing their faith in the political process?

The paper is generous enough to note that there were "honourable exceptions" – and that there were. And the Tories think they have handled it well enough to escape the tarnish that this surrender brings. But, whether honourable or Tory (or even both), they are all part of a defeated army. And, in any battle, the glory goes to the winners. Some on the losing side may have fought gallantly, but their deeds are rarely recorded – they are tarnished by the common defeat.

Thus it is that we hold parliament as a whole – as an institution – responsible. It has not summoned the courage to resist the executive, and ignore its lies and blandishments. It does not have the integrity to recognise that the residual sovereignty – or power, if you prefer – does not belong to it, but is held in trust for the people.

Yesterday, therefore, it gave away something that was not its to give – the decision to hand over our power to chose our form of government. More particularly, because this is one of a long line of surrenders, it refused to allow us to draw a line and say, "no more".

And in a display of hubris that he will live to regret, Miliband tells us that making such decision is "what MPs are paid for". It isn't, but if he thinks it is then they should be paid exactly what they are worth – nothing … zilch … nada.

As individuals, some MPs may be – and indeed are – admirable people. As a collective, they are a useless bunch of parasites who have colluded in their own abolition. All that remains it to do the decent thing and close down Parliament. Turn it into a museum by all means, but don't waste our time and money pretending that MPs have a purpose any longer.

Possibly, they do not realise what damage they have done – to themselves and this nation. Maybe they do, but do not care. Either way, the effect of what they have done is to destroy the contract between us, the people and our representatives. By this contract they rule us, with our consent.