They just don't get it! 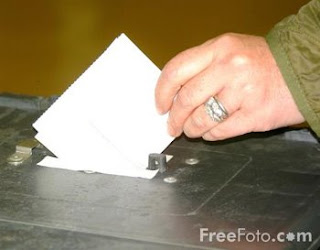 The Guardian tells us that Ministers are planning a consultation on changes to the voting system after local elections in May.

They have in mind a significant overhaul of electoral legislation to give voters a second vote. The will also propose opening polling stations at weekends and, crucially, they want to make voting compulsory.

Under the alternative voting system, ballot papers would allow for a second preference vote which would be redistributed from the lowest-scoring candidate's share until one candidate has more than 50 percent of the vote.

The changes are intended to increase turnout and, says The Guardian to "improve the legitimacy of the Commons". The ministers hope the measures will "increase the authority of MPs" and reduce voter disengagement.

These are a but of few of the overall changes being proposed, which include extending the system of "topical debates" in the Commons, so that MPs are seen to be talking about issues of immediate concern to the public.

What they don't seem to get though is that, having given away most of their powers to the European Union, with at least 70 percent of our laws made in Brussels – a figure set to increase – MPs are largely irrelevant.

Even with the issue of the moment, stem cell research – which is causing something of a stir is set to become an EU competence. The commission has already taken the preliminary steps to make it so.

Therefore, tinkering round the edges and changing the voting system is not going to increase the relevance, much less the authority of MPs. They will be seen to be relevant when, as a matter of fact, they are relevant.

However, if the MPs do eventually decide to make voting compulsory, that will be yet another law that many of us will delight in breaking.