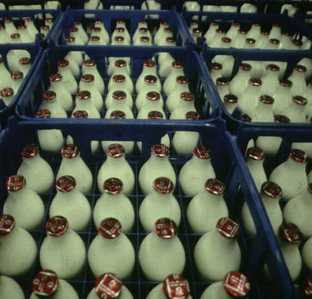 EU agriculture ministers today announced their approval of a two percent increase in milk quotas for the 27 member states, allowing an extra 2.84 million tonnes to be produced without penalty.

This is because the market for cheese and fresh milk production expanded between 2003 and 2007 absorbing an additional 5.5 million tonnes of milk. The EU commission now reckons that about 8.0 million tonnes is needed to meet growing internal demand, particularly for cheese. Additionally, it says, outlook for the world market is "positive", with growing demand for EU foods in particular in emerging markets and especially China.

Good news for farmers you might think. And it is good for some – but not in Britain. Through a combination of adverse factors, not least soaring feed costs plus the growing epidemic of Bovine TB, bluetongue disease and foot and mouth, the UK is short of cows while dairy farmers are going out of business faster than politicians can cash their expenses cheques.

As a result, Britain is likely to be one billion litres below its 14bn-litre EU quota by 2008 and some dairies are struggling to meet retail contracts. Increasing the quota, therefore will have no direct effect on British farmers in the short term.

In the longer term, however, as prices of manufactured goods like cheese spiral, the likelihood is that – if global recession sets in – sales of such high value goods will be the first to be affected, driving down prices and releasing a flood of liquid milk onto the market.

That is certainly the view of the Farmers Union of Wales. It is arguing that the move is "premature" and suggests that Chinese demand for EU dairy products is stalling. The effect could be to speed up the demise of British dairy farmers, even while there is a production shortfall

However – as we are constantly reminded – the EU operates a common agricultural policy. Thus, while Britain is the third largest dairy producer in the EU, after Germany and France, the needs of its industry take second place to the needs of the "colleagues".

Strangely, in this, Germany opposed the measure – also arguing that prices of finished goods were falling back. Austria also voted against, while France abstained. Qualified majority voting, therefore, ruled the day and – as always – British national interest went down the pan.

Aren't we so lucky to be members of the European Union.