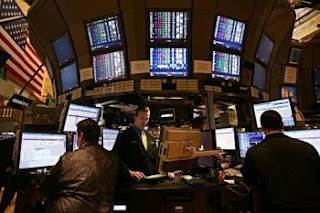 Some commentators are beginning to say the worst is over as US stock markets staged a powerful rebound following the Fed’s interest rate cut of three-quarters of one percent.

Although they may be clutching at straws, Wall Street certainly reacted positively with the Dow Jones ending 3.51 percent up on the day's trading. Market sentiment was also helped by better-than-expected earnings from Goldman Sachs and Lehman Brothers.

One swallow does not a summer bring, however, and the rate cut will do nothing to stem the flow of “hot” money into the eurozone, adding to stresses there, in what Ambrose Evans-Pritchard tells us is fast developing into a "monetary war".

Meanwhile, rather as expected, our own Northern Rock is en route to attracting rather more attention from the EU commission than many would like – or so Forbes says. If the EU was not looking at it though – one of our readers suggests the WTO might have some things to say.

Nevertheless, we learn from Forbes that the commission is likely to demand a cutback in Northern Rock's branch network and will be questioning the "generous" savings rates which Northern Rock is currently offering.

This is undoubtedly behind the bank's plan to axe up to a third of its jobs – the first of many firms which will be shedding staff in the months to come.

Amazingly though, this does not seem to be affecting Northern Rock's charity donations. The subsidy to newly nationalised Northern Rock has enabled its charitable arm to almost double its budget from £7m to £11m this year increasing to at least £15m a year until 2010.

Interestingly, amongst the charities supported are Friends of the Earth, £100,000 being paid to it over three years towards helping disadvantaged communities to address environmental issues. One suspects that the commission will not be anxious to disturb this cosy little arrangement.

As the fallout intensifies though, The Daily Telegraph editorial is pointing out the obvious differences between the handling of Bear Stearns and Northern Rock. Strangely, it does not highlight the EU dimension, leaving that to the letters column with Stuart Noyes making the obvious point.

The British Government propped up Northern Rock, but this week will have to convince its masters in Brussels that nationalising the bank conforms to European law, he writes. When Bear Stearns crumbles, the US Federal Reserve bails it out. Who are the masters of the Federal Reserve? Ultimately the American people. So in America, the government's masters are the American people.

This one, we suspect, is going to run and run – as indeed will this whole saga. Not least, the currency stresses in the eurozone are bound to cause some spectacular fireworks in the not too distant future, with the dollar continuing to trade at record lows against the euro.

And, if British blogs are reluctant to rush in where Cameron fears to tread, four good US blogs have been recommended to us. These are: