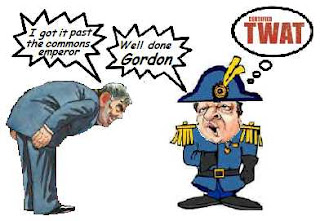 Although the referendum debate last Wednesday marked the watershed moment on the constitutional Lisbon treaty ratification process, yesterday was actually the day when the European Union (Amendment) Bill actually cleared the Commons with the MPs voting by 346 votes to 206 to approve the Bill.

Foreign Secretary David Miliband, said the treaty was good for the UK and said Conservative "scaremongering" was "dangerous and deluded" but, so irrelevant have MPs become that – at the time of writing – the only media record of the event is on the BBC website. In fact, who cares what they say any more?

It is perhaps ironic though that one of the dominant news items of yesterday was the proposal that Britain's teenagers pledge an oath of allegiance to the Queen, this on the same day that, effectively, our parliament pledged its allegiance to the European Union.

The big story though is a Scottish rebellion at the thought of such a declaration – apparently heedless of the fact that the Scots - like us - now owe a higher allegiance to the blue and yellow flag which makes their concern about the Queen entirely redundant.

Needless to say, this has entirely escaped media comment and, with the budget theatre taking centre stage tomorrow, all attention will be focused on Darling's statement. The EU is yesterday's news – even though it is tomorrow's reality.

With a great sense of timing though, Gordon Brown can see through the debate tomorrow and then go toddling off to Brussels to tell his masters how successful he has been. He can then – potentially – commit the UK to greater expenditure than even Mr Darling can contemplate.

Had Brown been in the House during the great giveaway, he would have heard the Northern Irish Democratic Unionist, Sammy Wilson, warn that by passing the legislation, MPs would be doing "irreparable damage" to their image and the powers of Parliament.

He wasn't there and 346 MPs didn't listen. So they have indeed done "irreparable damage" – but they don't care. The only surprise is that they did not burst into a new rendition of the "blue flag" to replace the Labour anthem. It would be a lot more honest than prattling about an oath of allegience to Mrs Windsor, EU citizen.