A distant disaster … not much news 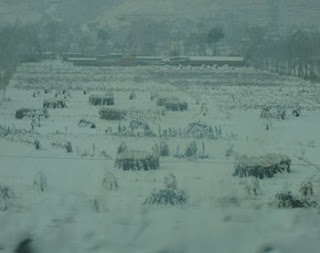 Had these been more accessible and closer to home, perhaps they would have been given more attention, but even with the distance – in time and space – as the news filters out of China of the scale of the weather disaster, the details are quite staggering.

We now learn from Xinhuanet that the recent snows left 1.65 million people snowblind and frostbitten, 500,000 livestock and wildlife dead in the in Tibetan prefectures of northwestern Qinghai Province. Additionally, some 3.1 million others are on the verge of starvation.

The provincial meteorological bureau is recording that, since October last year, consecutive low temperature had gripped the province. The temperature plunged to minus 36.3 degrees centigrade, the record lowest in January in the province. In Yushu, Guoluo and Huangnan Tibet Autonomous Prefectures, most of the grassland was covered by snow, usually 6-12 inches thick, which had brought great losses to local animal husbandry.

Even now, a month from the very worst of the weather, 130,000 people have run out of fuel, 350,000 people are in need of food and 110,000 are short of warm clothes or quilts. The provincial government is currently evacuating 11,000 people from 2,000 herdsmen households, where local conditions prevent human habitation.

Nor, as details continue to emerge, is Qinghai Province on its own. The storms that plagued southern China since mid-January, leading to widespread traffic jams, structural collapses, blackouts and crop losses in 19 provinces, are now reckoned to have cost over $20 billion, twice the earlier estimate in mid-February.

Needless to say, the dramatic coverage in late January of the weather in China is but a distant memory, the events no longer of any concern. "A distant disaster … not much news" is the guiding ethos of our media.