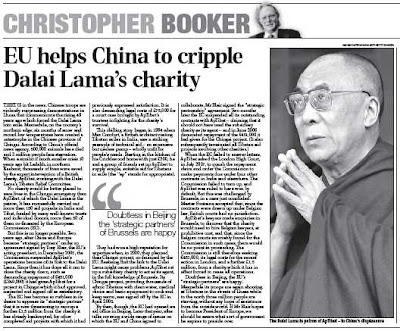 Leaders of the EU member states have been going through the motions on the Chinese action in Tibet, asking for "restraint" on the part of the Chinese authorities and for "human rights to be respected".

However, the EU's Slovenian presidency has not yet agreed on a joint declaration with members – but it very little matters if they do. Fine words butter no parsnips, as they say, and if you want a real indicator of what the people of Tibet mean to EU members, look to the Booker column today.

On the country's northern edge, Booker writes, six months of snow and record low temperatures have created a catastrophe in the Chinese province of Chingai. According to China's official news agency, 500,000 animals have died and three million people face starvation. When a similar if much smaller crisis 10 years ago hit Ladakh, in northern Kashmir, thousands of lives were saved by the expert intervention of a British charity, ApTibet, working with the Dalai Lama's Tibetan Relief Committee.

No charity would be better placed to save lives in Chingai than ApTibet, of which the Dalai Lama is the patron. It has carried out more than 150 aid projects in India and Tibet, funded by many well-known trusts and individual donors, more than 50 of them co-financed by the European Commission (EC).

But this is no longer possible. Two years ago, after China and Europe became "strategic partners" under an agreement signed by Tony Blair, the EU's acting president, in December 2005, the Commission suspended ApTibet's operations because of its link to the Dalai Lama. Since then, it has done all it can to close the charity down, such as demanding repayment of €451,000 (£340,000) it had given ApTibet for a project in Chingai which it had approved, inspected and signed off as satisfactory.

The EC has become so ruthless in its desire to appease its "strategic partner" that it is now threatening to recoup a further £1.5 million from the charity it has already bankrupted, for other completed aid projects with which it had previously expressed satisfaction. It is also demanding legal costs of £75,000 for a court case brought by ApTibet's trustees in fighting for the charity's survival.

This chilling story began in 1984 when Max Comfort, a British architect visiting Tibetan exiles in India, saw a striking example of technical aid - an expensive but useless pump - wholly unfit for people's needs. Starting in the kitchen of his Cricklewood home with just £300, he and a group of friends set up ApTibet to supply simple, suitable aid for Tibetans in exile (the "ap" stands for appropriate).

They had won a high reputation for expertise when, in 2000, they planned their Chingai project, co-financed by the EU. Realising that the link to the Dalai Lama might cause problems, ApTibet set up a subsidiary charity to act as its agent, in the full knowledge of Brussels. Its Chingai project, providing thousands of ethnic Tibetans with clean water, medical clinics and basic equipment with which to cook and keep warm, was signed off by the EC in April 2005.

By then, though, the EC had opened an aid office in Beijing. Later that year, after talks covering a wide range of issues on which the EU and China agreed to collaborate, Mr Blair signed the "strategic partnership" agreement. Two months later, the EC suspended its outstanding contracts with ApTibet - claiming that it should not have used the subsidiary charity as its agent - and in June 2006 demanded repayment of the €451,000 it had given for the Chingai project. (It subsequently terminated all Tibetan aid projects involving other charities.)

When the EC failed to answer letters, ApTibet asked the London High Court, in July 2007, to quash the repayment claim and order the Commission to make payments due under four other contracts in India and elsewhere. The Commission failed to turn up, and ApTibet was ruled to have won by default. But this was challenged by Brussels, in a case just concluded. Master Fontaine accepted that, since the contracts were drawn up under Belgian law, British courts had no jurisdiction.

ApTibet's lawyers made enquiries in Brussels, to discover that the charity would need to hire Belgian lawyers, at prohibitive cost, and that, since the Belgian courts invariably found for the Commission in such cases, there would be no point in proceeding. The Commission is still therefore seeking €451,000, its legal costs for the recent action in London, and a further £1.5 million, from a charity which it has in effect forced to cease all operations.

Doubtless in Beijing, the EU's "strategic partners" are happy. Meanwhile, its troops are again shooting at Tibetans in the streets of Lhasa, while to the north, three million people are starving, without any hope of assistance from the outside world.

If Mr Blair hopes to become President of Europe (unlikely though that might be), we should be aware what sort of government he aspires to preside over, concludes Booker. One thing for sure, Blair knows already.