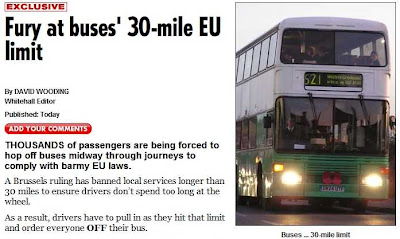 It is no wonder that the EU is so badly covered, when even a national paper with the huge resources of The Sun cannot even get a simple story right.

Its latest effort in the department is a banner headline, "Fury at buses 'EU 30-mile limit'", the story purporting to tell us that "thousands of passengers are being forced to hop off buses midway through journeys to comply with barmy EU laws."

So we are told, "A Brussels ruling has banned local services longer than 30 miles to ensure drivers don’t spend too long at the wheel. As a result, drivers have to pull in as they hit that limit and order everyone OFF their bus. They then change the route number on the front and invite passengers to jump back ON before resuming the trip" (the paper's emphasis).

Actually – something that will not surprise any of our readers – this is not true. "Brussels" has not banned local services longer than 30 miles (50 km, if you want to be pedantic). Simply, the rules now require (since 1 January) that any bus plying a route longer than this distance must be fitted with a tachograph.

This is a story we did last December and the BBC website even earlier, the latter then remarking that bus firms were complaining that the £1,000 cost of the device was too much, and would force them to split routes, causing disruption.

That, in fact, is exactly what is happening, and what The Sun is now reporting although, from its copy, you would not get the first inkling of the real nature of the problem.

Instead, we get a "rentaquote" insert from Lib Dem transport spokesman Norman Baker who, The Sun tells us, "blasted the 'lunatic law'". And does Baker know what he is talking about, when he says: “These rules don't stop buses running more than 30 miles… All they do is inconvenience the passengers who have to keep getting on and off. It's like an Ealing comedy"?

Then we learn that he has written to transport secretary Ruth Kelly demanding an opt-out – and a fat lot of good that will do him, but it looks good for a drive-by media quote, making it look as if he is doing something constructive.

The worst of it though is that The Daily Telegraph has repeated the story in what is obviously a re-write of the tabloid effort, even down to regurgitating The Sun's erroneous claim that, "Long-distance coach journeys are exempt from the law."

Er… no they are not. They have had to have tachographs for years. This particular bit of legislation is extending that law to cover local routes – which is where the trouble started.

But then, does it really matter that the journos are peddling shoddy goods? The fact is that they are always doing it. What really worries is that so many people still take what they write seriously, without doing their own checking.