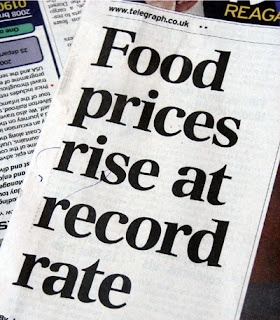 It is not only the politicians who live in a parallel universe, but also the political journalists. Splashed all over the front page of The Daily Telegraph today is the "shock horror" headline, "Food prices at record rate", leading a story by James Kirkup, the paper's political correspondent.

As to the causes of this rise, however, we are told that the increases are being driven by "rising meat prices and global shortages in key crops, caused both by adverse weather and the demand created by China's rampant economic growth." Later, even "global warming" gets a mention but, nowhere in the long article, will you find any mention of biofuels.

Now, while the rises are indeed the result of the complex interaction of a number of factors, no knowledgeable commentator could possibly discuss them without factoring in the effect on the market of the drive for biofuels, as did Ambrose Evans-Pritchard writing in the same paper in November.

Kirkup, of course, is in the entertainment section and, as befits his standing, his article is superficial at best – not wrong, but superficial – and lacking essential details. He writes glibly, for instance, about the increase in meat prices, not perhaps realising that the main effect is on pigs and poultry which are badly affected by grain prices, feed being the greater proportion of the rearing cost.

Nor is the Chinese situation, as Kirkup would have it, simply a matter of "rampant demand" for, as we reported earlier, there are serious issues in China, and the greater effect is due to a variety of factors. Of those, we see the reduction in land availability due to industrialisation and population pressure, plus the shortage of water as more is diverted to industry and much becomes too polluted for agriculture.

But, being in the entertainment industry, Kirkup devotes more space to a "cut and paste" job, splicing in a comment from Philip Hammond, the Tory shadow chief secretary to the treasury. He is allowed to make a partisan and completely parochial political point: "After 10 years of Gordon Brown’s economic management, we are now faced with a classic squeeze. The economy is slowing down and at the same time inflation is rearing its ugly head again".

However, apart from the fact that the prices of food commodities are largely determined by the global market, the huge elephant in the room, entirely missing from Kirkup's piece, is the central fact that the management of the food supply in the UK – insofar as it can be managed – is entirely an EU competence.

While the EU cannot be held entirely responsible for the global rise in food commodities, its mismanagement of stocks and its tardy response to the price hikes have contributed significantly to the problem.

Add to that, the complete lack of engagement on the part of the commission and its mad dash for biofuels, and it is not to Gordon Brown that Philip Hammond should be looking, but to our masters over the seas in Brussels.

But, just as the Tories don't do "Europe", neither does James Kirkup. He is far too grand to deal with this trivial subject, leaving it to the likes of the paper's Brussels correspondent, Bruno Waterfield, who being just a mere hack, is never consulted on the really important "political" stories.

So it is that the parallel universes live, in the nature of things, side-by-side, the real world and the foetid, narrow world of domestic politics which is now so far from reality as to be unrecognisable.

The really big joke, though, is that all the grand commentators of the British political scene firmly believe they are indulging in "real" politics, thinking that "Brussels" is simply a marginal obsession best left to the nerds. As it is, all they are doing is playing at the margins, entirely ignorant of the fact that the power has gone elsewhere, where the important decisions are made by people they have never even heard of, in a city which they largely ignore.