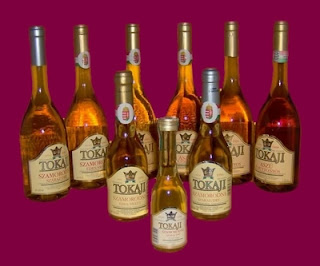 Well, I don’t know about song, though music is rarely absent from any story to do with Italy or Hungary, but wine and women definitely turn up in this one.

The wine is spelled variously as Tokay or Tocai and has been a problem for some time. Tokay or, in its correct spelling, Tokaji, that is of the place called Tokaj, is the famous dessert wine of Hungary. Grown and produced for a number of centuries, it is highly valued and, in my own perhaps not unbiased opinion, is the best of that breed, far outranking the French ones. (But I am prepared to listen to alternative points of view on this.)

So proud of this wine are the Hungarians that there is a reference to it in verse 3 of the National Anthem, the words being written by the well-known poet and litterateur of the early nineteenth century, Ferenc Kölcsey. (Hey, you have to keep up on this blog, you know.)

Other wines have been named Tokay as well, including one in Alsace, but the one that has been a particular problem is the Italian Tocai, a medium-bodied, very pleasant, dry white wine from the Friuliano region. Pleasant it may be but it is not a patch on the real Tokaji though it, too, seems to have existed from 1700.

The fact is, however, that French and Italian food and wine producers have benefited from the pernicious EU system of name protection. Now the decision has gone against them and they do not like it much. “Under the terms of Hungary's EU accession, it was agreed that winegrowers in Italy and France, which also had a wine called Tokay d'Alsace, should relinquish the name.”

The story as published on Buzzle.com quotes the Guardian from 2006 and shows that the Italian wine producers were all set either to challenge or to circumvent the decision, whichever came easier. Sadly, they found just as many non-French and non-Italian producers have found in the past that it is not so easy and having produced a wine called Tocai since 1700 is not going to save you from the ECJ deciding who can and who cannot use certain labels.

An appeal by the Friuli-Venezia-Giulia region of Italy to the European Court has been turned down, with the judges ruling that Italian Tocai “does not qualify as a geographical indication” because “it has no special quality, reputation or characteristic that is attributable to its geographic origin”.

Gianola Nonino, whose family has been making wine at Udine in Friuli for generations, called the decision “appalling”.

“They have stolen a part of our history,” she said, adding that the new name, Friulano, was "terrible”, since it was simply an adjective describing anything that comes from Friuli.

Marco Felluga, another leading Friuli wine producer, said that the loss of the Tocai brand was “incredible . . . Italy has lost its wine war with Hungary. It’s like saying that from tomorrow Italians cannot call pizza pizza any more.”

Signor Pizzul said that the row was “particularly absurd because the Italian and Hungarian versions of Tocai are quite different”. Italian Tocai is an aromatic dry white made entirely from the Tocai grape (known as Sauvignon Vert in France), whereas Hungarian Tokai or Tokaji is a sweet dessert wine made using Furmint and Haréslvelü grapes.

The latest news is that nothing much has changed. The ECJ maintains that Hungary alone has the right to use the name Tokaji or any version thereof and the Italian wine makers who will now have to call their Friuliano are worried that they will lose sales.

“It would almost be comical if it were not so serious,” the association said. “Chambers of commerce that have to register Friuli wine for 2008 cannot because they don’t know what to call it.”

Indeed, one could say that about almost anything to do with EU regulation that it would be comical if it were not so serious.

Sadly, this victory (if it ever materializes, that is) does not seem to make the Hungarians any happier, perhaps because they are largely unaware of the battle. The Courrier International.com quotes from an article published in the well-known Hungarian weekly, Élet és Irodalom (Life and Literature):

Surveys show that the EU has lost popularity in Hungary in 2007. That's because the EU is seen as an elitist theme, suggests sociologist Pál Tamás. "Gradually, the relationship between Hungary and the EU has changed. True, the EU is still seen as connected with Brussels, officials and regulations ? though in day to day talk the term EU is increasingly used to mean just that - all of the Union. ... At the same time, however, there is a widely accepted view that we are second-class EU citizens. In other words, EU acceptance was their decision, not ours. This notion can only be overcome through demonstrations of our own interests, perhaps through independent decisions on specific issues."

Actually, as we wrote at the time, the support for EU membership was lukewarm at best in most East European countries, particularly Hungary. The turn-out for those referendums was very low, not even reaching 50 per cent in Hungary. The reason was clear: few people wanted to vote for the parties that opposed membership, which were either rather unpleasant, archaic, inward looking nationalists or unreconstructed communists but there was no great enthusiasm for the actual project either.

The article itself (for those who read Hungarian) is considerably longer but the summary is fair. EU membership is perceived as an elite project, which has given little to the people of Hungary. Ah well, we did warn them but they wouldn’t listen. 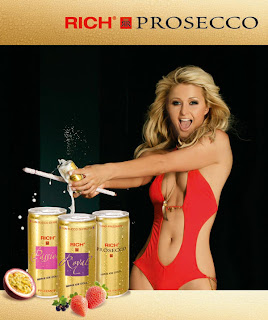 Wait a minute, I hear you cry. What happened to the women? We have had the wine and there will be no song but women?

For that we have to go back to Italy’s rows with the world, it sometimes seems, about its alcoholic production. Paris Hilton, the heiress to a somewhat decreasing number of millions if gossip columns are to be believed, has been hired to advertise something called Rich Prosecco.

The tussle with Paris Hilton, meanwhile, is over a drink called Rich Prosecco and its advertising campaign featuring the heiress wearing nothing but a coating of gold paint, in imitation of the actress Shirley Eaton in the James Bond film Goldfinger.

On the whole Italians do not object to seeing Ms Hilton in the nude. What has caused anger is that she has not only used the name “prosecco”, which Italians regard as their copyright, but also — sacrilegiously — put the drink in a can and mixed it with fruit juice.

The defence offered by Ms Hilton’s publicity machine is that Rich Prosecco is not being marketed in Italy. It was launched last year at a typically extravagant “mega-party” in the Austrian Alps. Ms Hilton, who emerged from a helicopter in a glittering dress, declared the drink to be “yummy”.

Günther Aloys, the businessman who created Rich Prosecco, said that she was “pleasant and uncomplicated. Nobody embodies carefree lust for life as convincingly and glamorously as Paris Hilton.”

However, in Treviso, one of the centres of Italian prosecco production, winemakers are not amused. Fulvio Brunetta, head of the Treviso branch of Coldiretti, the farmers’ union, said that Ms Hilton’s drink was an insult. He said Italian producers would meet this month to consider their response, “up to and including legal action”. Mr Brunetta said that he had nothing against Ms Hilton. “But she is . . . creating a generation of consumers who will forever associate the name of prosecco with something similar to an alcoholic fruit drink.”

It seems to me (and I am not a prosecco drinker nor somebody who would buy a disgusting sounding canned drink because Ms Hilton has painted herself gold) that people who “will forever associate the name of prosecco with something similar to an alcoholic fruit drink” are unlikely to buy the real stuff, anyway. It all adds to the gaiety of nations and the bank accounts of lawyers.
Posted by Helen at 19:22