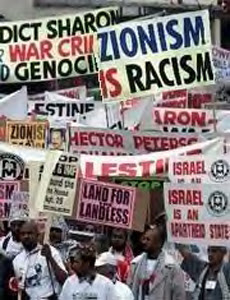 Oh no, not again, I hear our readers cry. Unfortunately yes, but I promise to leave the subject alone for a little while. It has always been our contention that the fight against the EU has to be part of a fight against all unaccountable and too often corrupt transnational organizations (tranzis) that are trying to take power from the few democratic countries that exist, prevent the others from becoming democratic and impose their own governance by transnational lawyers and officials who are always nice to tyrannical kleptocrats.

For once, the news is refreshingly good. Canada has announced that it will not attend the next anti-Western, anti-American, anti-Israeli, anti-Semitic hate fest, otherwise known as the Durban Anti-Racism Conference in 2009.

We have written about this conference before, pointing out that the committee that is organizing it is chaired by Libya, a country that knows a thing or two about freedom and tolerance (lack of), and includes Iran, “whose President has repeatedly and forcefully called for the annihilation of Israel, proclaimed that the Holocaust was probably a joke invented by the international Zionist conspiracy and hosted an anti-holocaust cartoon festival”.

Gateway Pundit published a really interesting hand-out from the 2001 conference that sighs over the fact that Hitler did not win.

According to Reuters (we always acknowledge our sources on this blog)

A similar meeting at the same venue in 2001 was marred when Israel and the United States walked out in protest over draft conference texts branding Israel as a racist and apartheid state -- language that was later dropped.

"(We) had hoped that the preparatory process for the 2009 ... conference would remedy the mistakes of the past. Despite our efforts, we have concluded that it will not. Canada will therefore not participate," Foreign Minister Maxime Bernier said in a statement.

Jason Kenney, the secretary of state for multiculturalism, said the Conservative government was sure the conference would "showcase the same regrettable anti-Semitism" as the 2001 meeting.

"Our government sees no value in allowing Canada's participation to continue to dignify or legitimate such hateful and un-Canadian propaganda," he told Reuters.

Now there’s a secretary of state for multiculturalism one can have some time for. He clearly believes that racism is racism, no matter who expresses it and anti-Semitism is wrong, no matter how it is phrased.

There is, at the moment a certain amount of ghashing of teeth and whining about those nasty Canadians misunderstanding and not wanting to get involved in true multilateral activity blah-blah-blah. As CTV.ca says with a collective straight face:

But African governments complained at the last conference that Western governments had chosen to highlight treatment of the Israeli issue as if it was the only one on the agenda.

South Africa, the host country, stopped short of calling U.S. President George Bush a racist, saying instead that he was not "anti-racist." Other African countries were upset that Britain and the West refused to overtly apologize for their support of centuries of slavery.

Well, I don’t know. I remember noting at the time that rich, spoilt, largely white middle class kids were screaming racist abuse at Colin Powell, then Secretary of State. Nor did that endless demand for an apology for slavery escape everybody’s attention.

Perhaps what the British should have apologized for is abolishing the slave trade in 1807, thus depriving the Arab slavers, whom the Royal Navy fought, and certain African chieftains of their income from selling slaves.

The real question is whether Canada will be supported by, at the very least, the other Anglospheric countries. The new Australian Prime Minister, Kevin Rudd, is a former diplomat, at ease with the tranzis, so one need not rely on him. The United States are going through an agonizing if entertaining election, so no decisions taken now would be binding. That may be a good reason for President Bush to make a significant gesture, especially after the ridiculous Annapolis Conference and equally ridiculous trip to the Middle East.

What of our own Prime Minister? He made a half-hearted gesture over President Mugabe and the EU-Africa Summit. Will he go that extra mile and pull Britain from the Durban Conference? Oh wait, I am not sure he can. This is probably part of the common foreign policy and, as such, EU competence.
Posted by Helen at 14:02