Mr Brown wants to give them more powers? 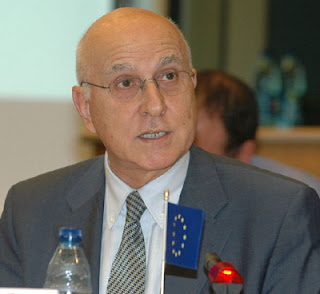 Courtesy of the BBC, we learn that EU environment commissioner Stavros Dimas is admitting that the EU did not foresee the problems raised by its drive for a ten percent biofuel quota, due to be discussed in Brussels in 23 January.

The BBC refers to "recent reports" that have warned of rising food prices and rainforest destruction from increased biofuel production, problems which were evident to even the meanest of intellects and reported widely by this blog.

A couple of years ago, says the BBC's report:

…biofuels looked like the perfect get-out-of-jail free card for car manufacturers under pressure to cut carbon emissions. Instead of just revolutionising car design they could reduce transport pollution overall if drivers used more fuel from plants which would have soaked up CO2 while they were growing. The EU leapt at the idea - and set its biofuels targets.

Since then, it adds, reports have warned that some biofuels barely cut emissions at all - and others can lead to rainforest destruction, drive up food prices, or prompt rich firms to drive poor people off their land to convert it to fuel crops.

Thus does the baleful Mr Dimas tell the BBC, "We have seen that the environmental problems caused by biofuels and also the social problems are bigger than we thought they were. So we have to move very carefully … We have to have criteria for sustainability, including social and environmental issues, because there are some benefits from biofuels."

But, instead of retreating from their madness, Dimas is saying that the EU would introduce a certification scheme for biofuels and promises a "clampdown" on biodiesel from palm oil which, amongst other things, is leading to forest destruction in Indonesia.

This is the classic response from these morons. Having introduced a policy that is utterly mad, they are incapable of reversing course. Instead, they simply pile another layer of bureaucracy on top of their original madness which, in the broader scheme of things, will make matters even worse.

But the real madness is that Gordon Brown and his merry men want to give these incompetent, fatuous, dim-witted, short-sighted, inept, anally dysfunctional and utterly useless morons even more powers via the Lisbon treaty. Just what does it take for him to realise that, when it comes to incompetent government, the EU outstrips the performance of even his dire administration?