EU to the rescue? 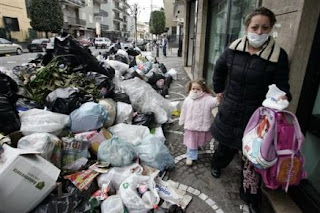 After 14 years of demonstrating its complete inability to get to grips with the problem, we are now told that the EU is threatening the Italian government with court action over its rubbish crisis.

At the regular meeting of our central government today, the commissioners are due to issue a "reasoned opinion" on the matter, the final step before turning to the ECJ.

Nearly a month has passed since the commission was saying that Italy was in the "last chance saloon" and now, with Naples still submerged under stinking mounds of rubbish, Rome (prop. Romani Prodi) has tried the patience of its real government to much, and provoked it into action.

There are still just over 3,500 ton of uncollected garbage still clogging the streets (although how they can be so precise is anyone’s guess) - slightly down from 7,100 tonnes the previous week, when the army first began intervening in the strike.

Most entertaining is the EU environment commissioner, Stavros Dimas. He, we are told, has been particularly scathing about Rome's handling of the crisis, saying that, "What we are witnessing these days in Naples is not a crisis coming out of the blue … It is the culmination of a more than 14-year-old process of insufficient implementation of European waste legislation for which Italy has repeatedly been condemned by the European Court of Justice."

The great irony of this all, however, was that the Italian government declared an "emergency situation" in the region in 1994 in order to deal with the situation. It has taken this long for it not to act, and as long for the EU – which has the supreme power on this issue – to get around to acting, although it could take as long as another two years to get it to court.

It is perhaps just as well that neither Italy nor the EU is running our ambulance services. Their ideas of an "emergency" seem to be somewhat out of kilter with the normal meaning of the word.