The march of the Sefra 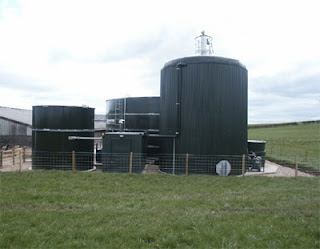 One groans inwardly at the report in The Sunday Telegraph today which has Prince Charles enjoining farmers to "make energy from muck".

The Prince of Wales, we are told, has urged Britain's farmers to tackle climate change by producing energy from farmyard waste, claiming that "communities could have their energy supplied from nearby farms". Technology that uses bacteria to break down animal manure and other waste can produce bio-gas which can, in turn, generate heat and electricity.

Yes indeed it can – the process is well established and is known as anaerobic digestion (plant pictured) and they could provide not only a useful source of energy but also a useful residue which can be used as a peat substitute for gardens and horticulture, reducing pressure on this non-renewable resource.

Furthermore, the technology is very popular across Europe, where there are a large number of on-farm digesters in operation – over 2,500 are currently in operation in Germany, for instance.

However, in the UK there are currently only about 30, despite the fact that the average size of farm is higher over here than in the rest of Europe, ostensibly making the economics even more attractive. Why this should be the case is a graphic example of the deadly combination of EU law and British bureaucracy.

Bearing in mind that the Directive has not proved to be a drag in other EU member states, though, something more than merely the directive must be responsible for the low uptake of the technology in the UK – and this is the case.

The root of the problem is the extraordinarily expensive bureaucracy in the UK which stems not from this government but from a little-known initiative in the Thatcher years, heralded by the Ibbs Report in 1988 (Improving Management in Government: The Next Steps). This brought into being the Executive Agency, sometimes called "Next Step" Agencies, after the title of the Ibbs Report.

The general aim of the initiative looked sound, in that it aimed to take some of the sclerotic backwaters of the Civil Service, like Companies House and the DVLA, and turn them into semi-independent agencies, with their own cost centres and lines of responsibility, making them more akin to private sector businesses.

Considering the continued lamentable performance of the DVLA, there is some considerable debate as to whether the whole initiative has been successful but, where it really went off the rails was in including not only trading and service providers in government but also some of the enforcement agencies.

By this means, law enforcement was turned into a business, and the agencies thus formed were charged with recovering their costs from the businesses over which they had power. Thus was born what Booker and I dubbed the Self-financing Regulatory Agency (Sefra), a term that has never really taken off, despite the importance of these agencies and the dire effects they are having on the business community.

One such Sefra was the Environment Agency. It was charged with implementing the IPPC Directive, which it approached (with considerable enthusiasm) on a total cost recovery basis. Thus, those businesses which operated the "scheduled processes" had to pay for the full costs of the Environment Agency when it came to authorising their use and their subsequent monitoring.

Here we come back to the anaerobic digesters. The plant and ancillary works are expensive and the economics are highly marginal although the balance sheet did fall the right way – until the Environment Agency fees were factored in.

Currently, just for authorising a standard, off-the-shelf plant the fees run to £1,470 and, for every year thereafter, a "subsistence fee" of £921 must be paid – just for the privilege of an Environment Agency official coming along to inspect the plant.

It is these fees which tilt the balance and make the whole process of on-farm anaerobic digestion uneconomic, which is why there are so few plants in the UK compared with the continent.

Partly, we can blame the EU but, in the main, this is due to the march of the Sefra – and the genius of our officials for stultifying and increasingly expensive bureaucracy. Even the hide-bound Germans do not hold a candle to the creative genius of our officials, which perhaps explains why British civil servants are so popular in Brussels.