This is global warming? 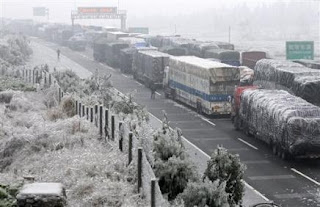 If nothing else, the news of massive snowstorms in China – the worst in 50 years - with the reported deaths of at least 50 people and massive economic disruption, should remind us that the effects of cold weather are rather more serious than the supposed impact of global warming.

Not least, the mobilisation of 460,000 troops from the People's Liberation Army and paramilitary forces, to deal with the crisis, points up the devastating impact of this bad weather.

The most alarming news is that there have been sharp rises in food prices, adding to inflation that is already at 11-year highs. This is, we are told, causing concern in Beijing as inflation has historically caused social unrest, something we pointed out at the end of last year.

One can take great delight, however, in watching the "warmists" squirm, Reuters reporting that "scientists" have been quick to rush into the breach, declaring that the snow storms are not directly linked to climate change. Merely, they are "an extreme event caused" by very cold winter temperatures and a La Nina weather pattern.

We have yet to experience any snow storms caused by very warm temperatures, but we'll let that one pass.

According to Dong Wenjie of the National Climate Centre, La Nina has brought moist air over southern China at a time of very cold winter temperatures, resulting in heavy snow falls. This, he says, "is mainly related to abnormal atmospheric circulation and the La Nina event." 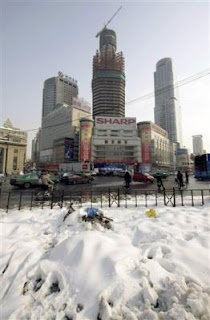 Dong adds that the National Climate Centre predicts that this La Nina event will continue at least up to summer 2008 at a medium to strong level," then pronouncing that, "With climate warming, extreme weather events are clearly increasing in frequency and intensity."

Australian climate scientist Penny Whetton, one of the authors of the UN's Intergovernmental Panel on Climate Change (IPCC) fourth assessment report, backs up the Chinese explanation for the storms, herself venturing the view that the bad weather was not linked to climate change.

"Those conditions are things that occur naturally and so every few years, few decades, everything just comes together right to produce an extreme event." She adds: "My guess is this is a natural event without any particular reason to link it to climate change. The climate change models are not predicting increases in snow events like this."

However, she could not leave it there. China, she said, could expect a less stable climate because of global warming, with various regions experiencing drier, wetter, hotter conditions, as well as more intense tropical storms. "Cold extremes are generally not predicted to become more intense and frequent because we have a warming climate."

Now enter David Jones, head of climate analysis at Australia's National Climate Centre. "We are seeing that in places like northern Canada, where there's been almost a doubling of rain and snow in the last few decades, and that's exactly what you expect cold polar desert regions to become, a lot wetter in a warmer world," he says.

Jones also says that China's snow storms could not be directly linked to climate change, unlike floods, heat waves and fires that are a result of rising world temperatures and rainfall. "Winter is a time of year in the northern hemisphere where you often get these extreme events. We have always had them and we will always have them," he adds.

Then, completing the confusion, he tells us: "Not only are we moving into a hotter world but a different world … You get more and more surprises as the world changes, because you are moving into a world where the atmosphere and climate just doesn't behave like it used to."

So, this isn't global warming but then, perhaps it is. Do you get the impression they don’t know quite whether they are coming of going?