We have been here before 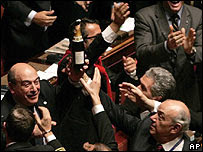 Well, just a few times. As predicted, the Italian Prime Minister, Romano Prodi has resigned after a vote of no confidence in the Senate where he had lost his majority. And so, goodbye the 61st Italian government since the war. Prodi was Prime Minister for 20 months, which is quite respectable. Maybe we should start getting rid of our governments that fast.

Fear not. While President Giorgio Napolitano conducts emergency negotiations with interested parties to form an interim government with as much support that can be mustered among all the disparate parties, a caretaker prime minister has been appointed. His name? Romano Prodi. You may have heard it before.

Now, what does this remind me of? Well there was the case of the European Commission under Jacques Santer that resigned (not dismissed by the European Parliament, as some of its members like to claim) and came back after a prolonged Brussels-type lunch as a caretaker Commission.

Not so long ago when the Constitutional Reform Lisbon Treaty was being signed in the eponymous city Belgium was represented by the caretaker prime minister, one Guy Verhofstadt, who had been defeated in the previous election. His caretaker government seems to be in for the duration.

In the meantime, Silvio Berlusconi is calling for a snap election under the existing rules that he introduced in his days as elected prime minister. His party is celebrating as can be seen in the picture I could not resist nicking from AP.
Posted by Helen at 21:01