The death of a petition 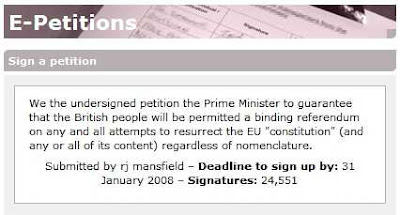 One event that should not pass without comment is the expiry today of one of the DowningStreet petitions calling for a referendum. This was the best supported of the many, yet looks like fading into obscurity having failed even to reach 25,000.

So ends a small chapter in the ignominious history of Europscepticism where, instead of piling in behind one initiative, all the little groupescules rushed in to create their own. Thus, we had the Farage effort, which currently stands at 6,807 (although it is still live), and the equally derisory attempt by Geoffrey Van Orden MEP, he of the Conservative Party, which attracted a mere 4,057 signatures by the time of its expiry on 4 January.

Even the high profile I want a referendum campaign only (currently) draws down 35,611 “supporters”, while The Daily Telegraph petition, despite the most intensive effort by the newspaper, is stalled on "more than 100,000", and has been quietly forgotten.

One can quite understand and sympathise with the strong desire of Eurosceptics to "do something" but, as we remarked earlier, this sort of activity demonstrates not strength but weakness.

When it comes to fighting the Juggernaut of European integration, it is very clear that, as far as Eurosceptics are concerned, “Tactics-R-Not-Us”. One day, perhaps, we will learn that winning long-term political battles requires more than just passion, intensity and persistence.

The Europhiliacs, who were never a popular movement and never attracted any significant public support for their "project", still managed to prevail. It might be a good idea to look at their tactics, and perhaps learn some lessons from them.