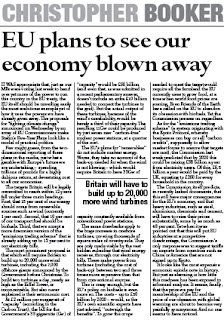 Given the huge costs imposed on this nation from the raft of EU environmental laws, it is utterly bizarre that so many people should applaud the EU's intervention in this field.

But, if anyone was in any doubt about the malign influence of the EU, all they need to do is read today’s Booker column, headed “EU plans to see our economy blown away”.

The reference, as you might expect, is to the proposals for "fighting climate change" announced on Wednesday, now virtually forgotten by the MSM, despite their importance and perhaps illustrating why it is that the EU does not feature highly in public consciousness.

In fact, given – as Booker illustrates – the profound effect that these proposals are going to have on our economy, this is one of those classic examples of a media besotted with local politics and issues, which simply cannot cope with the European Union.

Thus, writes Booker, "It was appropriate that, just as our MPs were voting last week to hand over yet more of the power to run this country in the EU treaty, the EU itself should be unveiling easily the most ambitious example yet of how it uses the powers we have already given away." The proposals, he adds, make Stalin's Five-Year Plans look like a model of practical politics.

The core of the article is Booker's best estimate of the costs of the commission’s extravaganza: up to 20,000 wind turbines, at a cost of nearly £70 billion; the insanity on biofuels which will cost £50 billion; and the "emissions trading scheme" set to be raising £38 billion a year from electricity users by 2020 (of which £6.5 billion a year would be paid by the UK, equating to £260 for every household in the country).

But an important secondary theme is the "two-dimensional reporting" of these plans in the media, which Booker calls, "the most expensive economic suicide note in history." Just as alarming, he says, is how little this madness has been exposed to informed analysis. It seems, finally, that the price we pay for membership of the EU and the price of our obsession with global warming are about to become very painfully synonymous. And no one seems to have noticed. 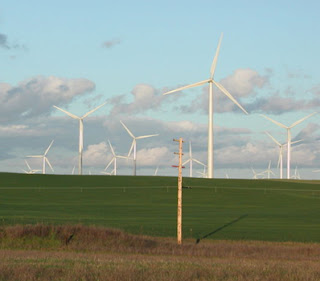 However, one aspect of this excursion into fantasy economics has come to the attention of The Sunday Times which has suddenly woken up to the fact that, "Wind farms turn huge profit with help of subsidies".

According to Jonathan Leake, the paper's environment editor, lavish subsidies and high electricity prices have turned Britain's onshore wind farms into an extraordinary moneyspinner, with a single two megawatt turbine capable of generating £500,000 of pure profit per year – comprising electricity sales worth £200,000 on the wholesale markets - plus another £300,000 of subsidy from taxpayers.

Since such turbines cost around £2m to build and last for 20 or more years, it means they can pay for themselves in just 4-5 years and then produce nothing but profit.

Through this means, "climate change" has become a huge rip-off with developers climbing over each other in their rush to apply for new wind farms. There are already 165 wind farms operating 1,944 turbines in Britain but another 34 are under construction, a further 118 have planning consent and 220 are under consideration.

To put this in perspective, Dieter Helm, professor of energy policy at Oxford University, calculates that it costs consumers up to £510 for each ton of CO2 emissions avoided through wind energy. "The level of subsidy for onshore wind farms is very high and it distorts the market, making it more attractive to invest there than in other technologies like solar power," he says. Ofgem, on the other hand, calculates that renewable energy subsidies will add £60 to consumer bills this year and that will keep rising.”