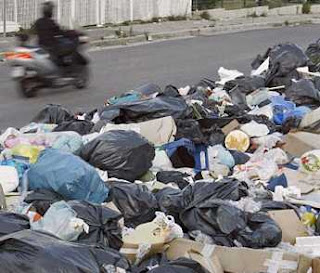 It emerged from nowhere in the British media in May and then disappeared just as quickly. But the problem did not go away even if it has now re-emerged as a newsworthy item.

We write, of course, of the refuse crisis in Naples which has escalated to the point where local residents are rioting, the police have been called in and have fired tear gas to disperse the crowds and the army has been mobilised to clear the rotting garbage heaps.

This is Italy in 2008, a state whose ministers form part of our government, help define the bulk of our laws and sit in judgement on us when we fail to comply with our masters’ diktats. Yet this is also a state which did not come into being until 1861, years after our first major Public Health Act of 1848, which set in train the legislation for waste disposal which survives to this very day.

Thus, while we kow-tow to the European Union, of which Italy is part, we are enjoined with a state which cannot even keep the streets of one of its major cities clear of refuse, a problem which, by all accounts, has been festering for some 11 years since a tip in the suburb of Pianura was closed and not replaced.

So far, it seems, 110,000 tons of rotting garbage has accumulated in the streets of Naples, with despairing residents torching some of the bigger piles. As a result, the civic authorities have decided to re-open the tip at Pianura. This has triggered the current riots, as residents there sought to prevent their suburb being disrupted by the stinking mass which has been allowed to accumulate.

Such is the state of Italian governance and the competence of the civic authorities that prime minister Romano Prodi – taking time out from not deporting Roma immigrants – has had to assume control. He is expected to announce emergency measures, including an expanded role for the army in clean-up operations.

This being Italy, there is inevitably, a criminal element involved, with the Camorra - the Naples version of Sicily's Mafia - is heavily embedded in the waste business, which means – as Reuters observes, "Naples has failed to get to grips with the problem that was first recognised as an emergency 14 years ago." 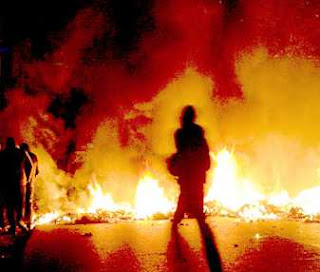 Illegal waste dumping and burning is blamed for poisoning the soil, water and air of large zones around the base of Mount Vesuvius. And an incinerator which was supposed to open at the end of 2007 is not ready.

Over here, where we so often complain of bad government – and rightly so – it is worth recalling that it was the so-called "winter of discontent" of 1978-9, with rubbish accumulating in the streets after binmen had gone on strike, that was instrumental in bringing down the Callaghan government. Yet, in Italy, despite years of dereliction in its most fundamental duties, governments come and go, untouched by the piles of garbage they leave behind.

Meanwhile, our supreme government in Brussels is already on the case, having issued in June "a first written warning and requesting information about the measures being taken to protect human health and the environment in the region".

It was then that the commission was citing its own Waste Framework Directive, which - it says - requires member states to take the necessary measures to prevent waste from being abandoned, dumped or disposed of in an uncontrolled way. It took the view that Italy had failed to fulfil its obligations under the directive by not putting in place an appropriate network of disposal facilities ensuring a high level of protection for the environment and public health in the Campania region.

Concerned by a then recent study coordinated by the World Health Organisation which showed increased mortality rates among people living near illegal waste dumps in the provinces of Naples and Caserta, environment commissioner, Stavros Dimas - reflecting "the urgency and gravity of the situation" - gave Italy one month to respond to its warning letter instead of the usual two-month deadline.

Seven months down the line, only now is Dimas suggesting that "Italy is languishing in the last chance saloon". Italian commission vice president Franco Frattini – taking time out from not deporting Roma immigrants – went on national television last night to state that a definitive decision on legal action would be taken by the end of January.

The fact that the EU is at least taking some (tardy) action – compared with 14 years of Italian government inaction – accounts for some of the popularity of the EU within Italy. No matter how bad the EU actually is, the Italian government is incomparably worse, in which context the EU – as so often – is seen as the saviour.

But why we, with our long tradition of effective and stable government – which had binmen out on the streets collecting rubbish before Italy was even a nation – should be tied up with this shower is another question altogether. Sanitation – like government – should begin (and end) at home.