As ye sow, so shall ye reap 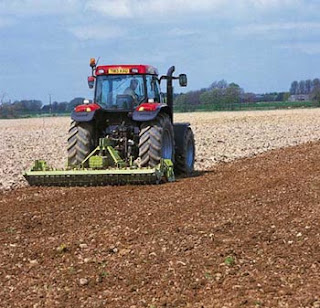 If the "colleagues" could take a little bit of time out from preening themselves over their cleverness in siphoning off funds from the CAP to fund their vanity project – the Galileo satellite positioning system – they should perhaps devote it to reading the piece by Ambrose Evans Pritchard in The Daily Telegraph yesterday, on the global food supply situation.

The essence of Ambrose's thesis is that we are moving from a situation in the global agricultural market where there is a structural surplus, to one of structural shortage and inflated commodity prices. This, he avers, is no short-term trend, but a major sea-change which is going to have a massive effect on our food supply, driven in part by the obsession with producing ever-larger quantities of biofuels. Increasingly, shortages and food price inflation are going to dominate global politics.

Here, we could take a little time out to do a little bit of preening on our own behalf, as we have been writing about just this for some months, with this piece especially, which we published in early October, setting out the issues.

In fact, we went a lot further than Ambrose, pointing out that there is a double whammy here, in that – as we drift into this new era – we are left with a situation where the strategic management of our food stocks has been handed over to the European Union, which relies on the CAP as its main instrument.

Yet, as we pointed out, contrary to myth, this is an instrument to manage – and pay for – agricultural surpluses. And now that we are moving into a period where sustained shortfalls of production are expected, we have the commission equipped with an instrument designed for one purpose which will – in the near future – have to be used for exactly the opposite purpose.

In this lies much of our frustration in writing posts for this blog. In many areas we are so far ahead of the game that some of our points are greeted with blank incomprehension, or ignored entirely, simply because rest of the blogging and media community is trailing so far behind that they cannot even begin to understand what we are writing about.

But what Ambrose has picked up is incredibly serious, with enormous long-term implications. It is a measure of him that, as one of the more perceptive analysts, he has actually picked it up. It is also a measure of the newspaper for which he works, that his piece is consigned to relative obscurity in the business section. This stuff should be front page news, with long editorials, op-eds and commentary. It is the very stuff of life.

More particularly, the fact that the "colleagues" are so short-sighted that they see a temporary surplus on account in the CAP as an opportunity to fund their vanity project should be viewed with grave concern. The larger part of this surplus (apart from the £300 million "fine" levied on the British because of its foul-up on subsidy payments) comes as a result of higher commodity prices which means that the EU has not had to buy up produce into intervention.

That really should be ringing alarm bells in Brussels, and in every other ministry in the EU member states. What is good, short-term for the agricultural budget, is having a devastating effect on livestock producers, their sectors being the first to be hit, as feed costs go through the roof.

Whole swathes of the industry are facing dire prospects and we are looking at the very real possibility of collapse. Used as we are to the moans and groans of farmers, this crisis is real and is not going to go away. Thus, funds "liberated" under the current CAP regimes, therefore, should be used as an opportunity for pursuing Galileo but directed to mitigating the worst effects of the violent shifts in commodity prices, supporting vital industries which, once gone can be restored only with great difficulty.

The greater problem, however, is in the very fact that what is an extremely serious emerging crisis is scarce recognised by policy-makers, who are allowing a drift into a situation which will have such devastating effects. Instead of looking hard and fast at what is needed to develop new policies for the future, they are messing around at the margins, apparently oblivious to what is really going on.

The Galileo funding scheme, therefore, it not only likely to stand testament to the vanity of the "colleagues", but as a monument to their inability to understand the world around them, and their failure to address issues of vital importance. So are we governed, giving new life to the old saw, "as ye sow, so shall ye reap".