Take back our government 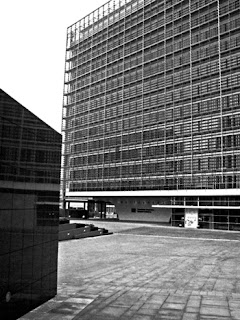 A superbly splenetic op-ed in The Daily Telegraph from Simon Heffer rightly points the finger at David Cameron, as the man on whom we are going to have to rely to get us out of the maw of the European Union and its ghastly constitutional Lisbon treaty.

Essentially, this always was and is a parliamentary battle. Parliament agreed that we should join the EEC in the first place and – short of an armed insurrection - it can only be parliament that can get us out. And, since it will never be Labour (as we know it) that will do the deed, our only realistic option is to convince the Conservative Party that its best interests are served by withdrawing us from the "project".

Thus does Heffer use Cameron as the proxy for the Conservative Party, having first stated his Eurosceptic credentials and then set out the vade mecum which drives us all in our campaign against this alien form of government. He writes:

The root of my opposition is straightforward. I wish to live in a country that governs itself. I wish to vote for people who, if elected, have power to take decisions and to alter the policies with which we are governed. I am not sure that is too much to ask.

What is the point of electing governments, if there are vital policies that they cannot alter? That to me has always been the clinching argument against our entering the single currency. We would be slaves to someone else's economic policy.

At present, if the way a government runs our economy is offensive, we can change the government and with it the policy. If we were economically administered from Frankfurt, simply unelecting one government and replacing it with another would be a footling exercise. The economic policy would stay the same.

Thus, the situation at the next election is that we will elect MPs and the majority party will be invited to form a "government" which will then select (or adopt) its own leader as prime minister. But that prime minister will immediately join the European Council while his ministers join the Council of the European Union, thus becoming members of our supreme government.

The faces, therefore, will have changed but the government will not. Its rules and policies will continue unchanged, entirely unaffected by our general election, to the extent that – as we have described it – all we will have achieved is an electorally mandated reshuffle.

We will have changed some of the people in our government, but not the government or its policies. And the policy of our local or provincial government will remain the same – to implement the law and diktats of our supreme government, and to ensure that it is enforced against our increasingly unwilling "citizens", who have never had an opportunity to vote for their real government, the one which resides in Brussels.

Thus does Heffer say what has many times been reflected in this blog and in the forum, that "the only way we might change things would be to riot to such an extent that a new European political accommodation would have to be made."

We hope he is right when he adds that, "The EU is now reaching a point where its centralising, sovereignty-stealing obsessions will cause day-to-day outrage to the public…", but it does not seem likely that this will happen in a hurry. Not least, as we have so often observed, the all-pervasive role of the EU in our government is so often concealed or ignored that very few people (including, or especially our MPs) fully realise the extent to which we are governed in Brussels.

Heffer writes that, "It may take this, or perhaps even one more federalising pile of dishonesty after it, to push us to breaking point: but we will break. We will break because we are, in our hearts, a democratic people," and there he is probably being realistic.

There is no evidence of, or feeling of rebellion in the populous, but with the Lisbon treaty under its belt, the EU will be back for more. It may have to wait perhaps ten years, but already, the text of another treaty is being written and, in due course, it will be unveiled and presented to the "citizens of Europe" as another essential "reform" needed to make the European Union more "efficient" – or whatever excuse they can think of to suit the particular exigencies of the moment.

Already though, as Heffer writes, "We resent the spectacle of our politicians - low though so many of them are - being humiliated by having to kow-tow to their, and our, masters in Brussels. We are revolted by the sight of our Parliament being rendered impotent."

That applies to some of us – many do not notice or care. So it is just those few who "feel special disgust - and here the Conservative Party should take note - at not being offered an adequate choice at elections on the future of Europe."

But the Heffer prescription is absolutely right when he says that the Conservatives "need a clear plan of what to do if, or rather when" the treaty is ratified. And, he says, "It is obvious what it must be: an unequivocal commitment to repeal the Act ratifying the treaty should they be returned to office after the next election,". So does he conclude:

…he can make a principled and populist commitment to stop any more of our democracy being flushed down the euro-lavatory… there is no excuse for a responsible opposition - and an opposition that says it would like to win power - to have no plan in place for when and if the horrid day comes, however much it might frighten the horses.

The danger is that Cameron may bank on the likelihood of being elected anyway, with or without a commitment to repeal the Act, calculating that the electorate will have forgotten all about the Lisbon treaty but the time of our next "electorally-mandated reshuffle". And he may well be right.

But, once in "power" he will not be able to ignore the fact that there is no power – that it has been given away. If he wants to take over the government of the United Kingdom, first of all he is going to have to take it back from Brussels.