A declaration of interest 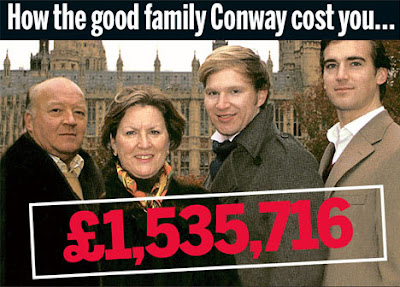 We have been watching the evolving story on MP Derek Conway with more that usual interest, even if we have not yet posted on the subject as it does not fit in with the mainstream theme of the blog. The full tale can be seen unravelling on the admirable Conservative Home blog – where the readers' comments are of special relevance.

However, this blog does have a direct interest in the issue. This writer's day job is a Parliamentary researcher and in that role, I have taken the (very modest) shilling from a number of MPs, all properly accounted for, recorded and tax paid.

Furthermore, some of the work is funded from a sponsor who subsidises the research effort, enabling work to be done which is not funded by the taxpayer. This is also properly recorded and declared. Unlike the young Conways, no one will suggest that this work is anything other than genuine, and very hard work it is at times.

That sponsorship also helps this blog keep going – in fact it is vital to it. That research then feeds into the Parliamentary process with "my" MPs (and others) often relying on the material posted to fuel questions, speeches and other work.

We (both of us) also feed stuff into the MSM – not always acknowledged, but sometimes we are. Then, there is the long-term association with Booker and The Sunday Telegraph, which is apparent to anyone who regularly reads this blog.

Work for Parliamentarians is not one-way. We benefit from the direct contact it gives us, the insights and the background information – as well as the more formal material such as answers to Parliamentary questions (sometimes "inspired" by us and some not), speeches, interventions and other material. It is an incredibly informal network which is mutually beneficial, to the Parliamentary process, to us and to our readers, even if they are not always aware of the sources of our material.

Furthermore, this means I see MPs at first hand. The ones for whom I work I have the greatest admiration – they work incredibly hard, spending long hours not only on direct Parliamentary work but also on looking after the interests of their constituents and others, a wholly benign process that is essential in what is left of our democracy.

They are backed by their unsung "assistants" who also work at a pace that I could not begin to match. That includes one of "my" MPs who employs his own wife, an incredibly hard-working lady, supremely well-educated, experienced and dedicated. If anything, for the hours she puts in and the pace of her work, she is grossly underpaid. The taxpayer is getting exceptional value for money.

The problem is now, with people like Conway abusing the system, the light of the media is shining on Parliamentarians, many of whom have made perfectly sound arrangements which are wholly in keeping with their duties and responsibilities. With the current hue and cry, there is a danger that the baby will be thrown out with the bathwater. More and more rigorous controls will be demanded, which will actually circumscribe the ability of MPs to do their jobs.

In this context, the demand that spouses should not be allowed to work for their partners is wholly misplaced. By and large, the taxpayer gets extraordinary value for such arrangements.

What has been missed though – or not sufficiently highlighted in respect of Mr Conway – is that if he was paying his sons for research which was not done, he, Derek Conway would not have been able to function adequately as an MP. Make no mistake, if MPs are to function effectively, then they do need a very strong research back-up.

Here, there is a broader issue. In political terms, "research" is often regarded as a low grade occupation, to be carried out by low-paid minions and wannabes, passing through on their way to becoming MPs or Party apparatchiks. The same, incidentally, can be said of broadcasting, where "research" is often carried out by those at the bottom of the dung heap, a short-term job for those on the first rung of the ladder.

To that extent, while it is easy to deride "overpaid" MPs and their lavish expenses, the system is actually kept afloat by a whole raft of support staff who are actually very poorly paid and, in many instances, over-worked. MPs who are trying to work within the limitations of the system are hard-put to fund a halfway decent support system.

This is something that is actually overlooked. If you want decent MPs, then they have to have good support and that costs money. Far from overpaying, we are actually getting the system on the cheap.

To an extent, this is what my co-editor was getting at in her earlier post. There is an alarming tendency in this country not to value intellectual effort, and a failure to recognise that such endeavour is a "product" in its own right with a very real value.

If we value the democratic process, therefore, we need to look beyond the current hue and cry, and at what is actually involved. While rightly seeking to ensure that the money paid to politicians is properly spent, and rooting out the many abuses, we also need to recognise that not all of the system is corrupt. If we want good research, good policy making, and active, well-informed MPs, then that has to be paid for. And if you pay monkeys, you get peanuts.