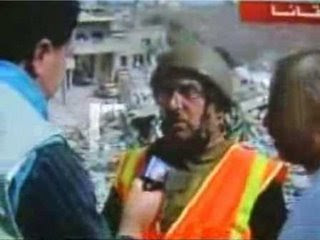 We are not altogether surprised to find that John Bolton, former US Ambassador to the UN, agrees with this blog. He does not say it in so many words but that does not matter.

According to Ha'aretz, John Bolton has publicly disagreed with Prime Minister Olmert's account of what motivated UN Security Council Resolution 1701 and the international pressure put on Israel to stop before it could destroy Hezbollah (who has since shown its gratitude by destroying Lebanon's political structure).

It was not Israel's ground offensive but the shock caused by the Qana episode or, to be precise, the way the Qana episode, about which we still do not know the truth, was presented by Hezbollywood and its willing agents, most of the Western MSM.

However, the former ambassador said, the main reason for America's retreat from its initial position was U.S. Secretary of State Condoleezza Rice, who "changed her mind fundamentally" after an Israeli aerial assault killed 28 civilians in Kana on July 30. "Rice exerted enormous pressure on me to reach an agreement already," he said. "Until Kana, the U.S. wasn't interested in another typical Middle Eastern cease-fire. We thought we would exploit the fighting to fundamentally change the situation, especially in Lebanon and Syria. But under the influence of her shock over Kana, the secretary of state changed her mind and only wanted an immediate end to the fire. That was the policy Rice dictated."

This blog was convinced at the time that the Qana episode was crucial in the propaganda war, which is an intrinsic part of the war against terror we are all fighting and which Israel had to fight in the summer of 2006 against Hezbollah.
Posted by Helen at 14:48