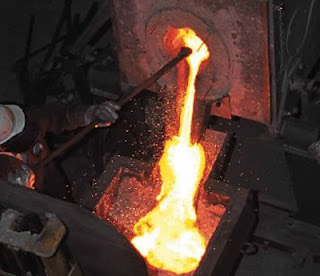 There is now conclusive proof that Gordon Brown lives in a parallel universe. This came yesterday when he told an audience of fawning groupies at an event organised by Business for a New Europe that membership of the EU was "the key" to business success.

Yet, no more than hours earlier, Gordon Moffat, secretary-general of Eurofer, the European iron and steel trade group, had accused the EU of a "vindictive" campaign to chase the sector out of Europe to meet its climate change goals.

This is a response to a remark by Jos Delbeke, who runs the EU scheme to cap and trade carbon emissions, who has admitted that the booming sector would have relocated offshore within a decade of a new law cutting greenhouse gas emissions coming into effect in 2013.

But, while Delbeke is rapidly disowning his own remark – despite several people witnessing it - the industry is campaigning heavily against this impost, with Moffatt claiming that its effect will be "catastrophic". He adds, "The way this is framed would give us no option but to leave."

On Friday, thirteen business associations wrote to Barroso asking him to amend the legislation, saying that the law would increase costs that could not be passed on to customers. Even according to commission research, prices would have to rise between five and 48 percent. Aluminium production would leave Europe within a decade.

A spokeswoman for dimwit Stavros Dimas, however, dismisses the industries as "scaremongering". "We are not destroying industries. It is about innovation and moving forward," she burbles. "Industries will have to adapt in the light of climate change and global competition." Moffat blunt response is that, "This is not innovative – it is vindictive."

Interestingly, the European steel industry is the most efficient in the world, using half as much energy as China to produce a ton of steel. However, an expected carbon price of €30 a tonne from 2013 would add €55, or about 10 percent, to steel prices, before the cost of higher power bills.

And, just to show how off the rails Gordon Brown really is, some 370,000 jobs are under threat, many in areas of high unemployment such as southern Italy and former communist countries. Furthermore, if the industries do move offshore, and there is every likelihood that they will, emission levels will undoubtedly increase as the plants are moved to areas of lighter regulation. "That does nothing to combat global warming," says Moffat.

Of course, the EU does not give a damn. As long as it can indulge in its gesture politics, whether it is REACH or any number of damaging laws which are crucifying industry, it will gaily shut down productive firms without a second thought. But, when the lights go out all over Europe, I suspect we will still be hearing little Gordon blathering that the EU is "the key" to business success.

He needs locking up.

UPDATE: In today's New York Times there is a long article on how Chinese businesses are buying up the plant from European smokestack industries and reinstalling it in China to go into competition with us.