They lied yesterday; they will lie tomorrow 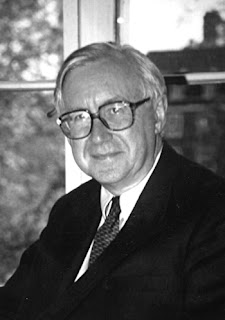 An absolutely stonking column on the Lisbon treaty from William Rees-Mogg hits the streets in The Times today, the title of which we have borrowed for our own post.

With the strap line, "The Lisbon treaty is a dangerous betrayal", Mogg tells us he is against the treaty "because it involves an important constitutional transfer of powers from the European nations to the European institutions, from national democracy to supranational bureaucracy."

He adds that he is in favour of a referendum, not only because it was promised by Labour, Tories and Liberal Democrats at the last general election, but also because it would be the best way to ratify - or reject - a big constitutional change. The people, he writes, should be consulted when their powers of self-government are being given away.

Continuing in this vein, he then writes:

I was struck yesterday by an observation of the Foreign Secretary, David Miliband. He said: "The reform treaty gives Britain a bigger voice in Europe." That seems to me to be the opposite of the truth. The reform or Lisbon treaty gives Europe a much bigger voice in Britain. It follows the original constitutional treaty in giving the European institutions that are not democratically accountable important additional powers, while failing to repatriate any powers to the individual European nations.

The original constitutional convention was supposed to reduce the democratic deficit of Europe. The Lisbon treaty has done the opposite, taking powers away from the nations and their electorate. The treaty is a defeat for the idea of a liberal democratic Europe; it is surprising that British Liberal Democrats are among its keenest supporters.

The Government's handling of the referendum issue has been shameful, because that, too, has been anti-democratic…

There is no need to re-invent the wheel. Go to the site and read the piece in full – and fume.

Meanwhile, The Times also tells us that Brown is on his way back from India and will arrive back too late to vote for his own treaty in the House of Commons – not that it matters, as the slime masquerading as Labour MPs will do his dirty work for him.

Shadow foreign secretary William Hague, who will be leading the "debate" for the Tories today, managed to get in a jibe at Brown's expense. "The Prime Minister who was prepared to sign the EU treaty but not in front of the cameras is now the Prime Minister who wants to ram the treaty through Parliament but not vote for it himself," he says.

In a way it is rather symbolic. Brown was late for the signing and now he will be so late that he will miss the vote. It is a pity it wasn't the other way around, not that that would have made any difference either. His faithful little lapdog Minibrand did the job for him, and one signature is all it takes to betray our country.