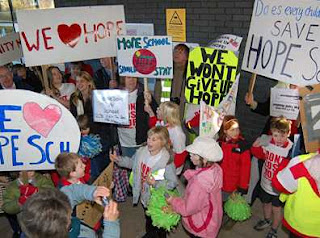 Three days ago, The Daily Telegraph took it up big time, and then today The Times goes to town on it, after the BBC ran it yesterday on all its TV and radio bulletins.

This is the great rural schools closure drama, a subject which would not usually be a theme of this blog only we did actually do it on 13 December last year, before the MSM had woken up to the issue. So much for "derivative" blogs that simply feed off the MSM!

What brought us into the fray was this fight on a small scale serves as a lesson of the vital power of democracy and, as events have shown, how important it is that democratic systems are maintained. 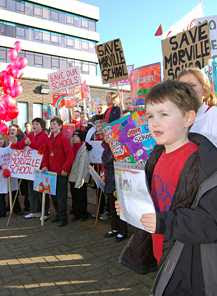 The events, as it happens, have turned out well, as the The Times headline indicates, proclaiming as it does, "Parent power halts closure of small schools". We learn from this that plans to close more than 50 village primary schools have been suspended after protests from parents, pupils and teachers that such action would devastate communities that may already have lost their local post offices and pubs.

Campaigners, the paper adds, have claimed that hundreds of schools in England and Wales, some with fewer than 50 pupils, face the threat of closure because falling rolls have left them too expensive to run.

And then we come to the latest development as, yesterday, Shropshire County Council said that it was putting on hold plans to close 22 rural primary schools, after a public demonstration and passionate appeals from schools. The council will, however, proceed with plans to merge 16 other schools – a plan which is not exceptional and is, in fact, quite sensible. But, where the paper goes wrong is in pointing just to "parents, pupils and teachers", when in fact the battle was a culmination of efforts by all the local Conservative MPs, led by Owen Paterson, who called an adjournment debate which we reported in December.

At the heart of the problem is a Labour government diktat which tells local authorities to close down their smaller "uneconomic" schools, many of which have surplus places, as a result of short-term demographic factors. As a central diktat, this had no regard to the fact that it would have a disproportionate effect on rural schools. These most often have catchment areas with small populations, yet provide a vital community service for which there is no ready alternative.

Then we come to the local Council education department which, if anything, is a model of the EU but on a smaller scale – dominated by officials with the elected members in their thrall. Like the good little apparatchiks they are, the officials set to with a master plan to close down 22 schools, a programme which would do massive yet save a mere £1.8 million out of a budget of £423 million, a "saving" of a mere 0.4 percent. 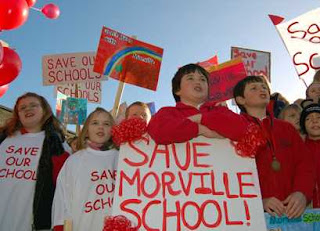 Approved by the councillors on the cabinet, this brought a storm of protest from the parents, pupils and teachers. But it was given focus and leadership by the local MPs, with local constituency association officials working behind the scenes. They were "advising" the councillors that refusal to respond to the wishes of their electorate could be highly damaging to their personal chances of re-election and could also make their Party unelectable.

In the event, the pressure worked. An alliance of MPs, local party workers, parents, teachers, children – and the media – and a few sympathetic councillors, prevailed against a central diktat enforced by unelected officials who were able to control key elected members.

And while the demonstrations were going on, the MPs were meeting the schools ministers Jim Knight who, stung by the raw expressions of people power and hostile media, was prepared to offer ideas to see the schools through the short-term problems. Also, he gave an undertaking to revisit the basic funding disparities which created the problem in the first place – Shropshire schools getting £337 per head less than the average in England, despite the difficulties which confront rural schools.

In our earlier piece, we drew the obvious parallels between this system which is responsive to peoples' wishes – albeit imperfectly – and the "post-democratic" system embraced by the EU. 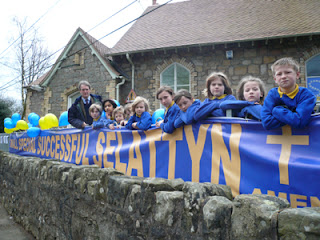 The European Union may think that society can function with what it terms "participative democracy", cutting out elected representatives and talking directly to the people. But, in the final analysis, when it comes to a confrontation between the officials and the people, it is only elected representatives who can hold the officials in check – themselves motivated by the effect of their actions on their election prospects.

In short, therefore, democracy does matter, and what applies at local level applies nationally as well. This, as we pointed out earlier, is what we are fighting for – and it is too important a battle to lose.