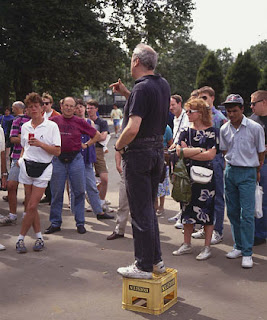 We are enjoined by a number of our readers to comment on the British blogger, who goes under the name of Lionheart. He faces arrest by Bedfordshire police when he returns to this country, on suspicion of inciting racial hatred.

The particular cause celebre it seems, is inter-racial grooming of young girls, featured last year in The Sunday Times, about which Lionheart has waxed volubly. Tim Worstall has some useful comments on the issue, not least observing that that the one blog post he has read, "tells me that he's not really my kind of guy".

As it stands – from what we can make out – the man is not at this stage to be charged for any offence and the arrest is an "administrative" device which the police are using to secure a formal interview on the record. For this, we must blame the Police and Criminal Evidence Act, as much as anything, which requires such laborious procedures, ostensibly to protect the rights of the accused – who are entitled to have legal representation during these interviews.

When and if Lionheart is charged will be another matter altogether. Tim rightly observes, "free speech is free speech" and there are matters rehearsed on Lionheart's blog which should indeed be getting coverage without the intervention of Mr Plod, who seems keener to investigate some "crimes" more than others. That is something of a bigger problem than merely this issue.

At this stage, therefore, one can only counsel a watching brief. Lurid declamations seem hardly warranted, and nor is the general accusation that we are descending into a police state - those who have actually lived in a police state will readily attest to the difference. More to the point, we have morally corrupt, venal and thoroughly inefficient police forces which are manifestly incapable of dealing with "normal" crime.

Unsurprisingly, they thus seem to spend a disproportionate amount of their time on what could best be described as "displacement activity", giving the impression of activity rather than producing anything of substance. That, possibly, is the greater concern.