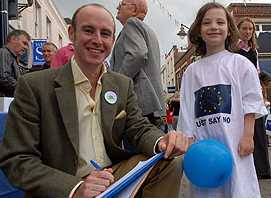 Well, well. It turns out that the great Daniel Hannan has finally woken up to the fact that every one of the NGOs cited by David Miliband as a supporter of the European Constitution Lisbon Treaty is in receipt of Brussels money. And so pleased with himself at his "discovery" that he actually sent us an e-mail telling us how clever he was, directing us to his clog.

As befits the great man, he could not possibly acknowledge that we got there first, having written in detail about this on 16 January. He even has the gall to tell us that "this information comes courtesy of the 'brilliant' blog Devils kitchen" - who posted on the subject on 23 January, having picked up the information from us in the first place (which, unlike the great Hannan, he had the courtesy to link back to us).

Then we get Tim Worstall on his blog on The Business site currently singing the praises of the fearless young Daniel. He also refers to the Devil site, obviously not having gone through the links to see from where the information came.

We don't complain when people take our information and use it – that is what this blog is for – a resource for people to use, and we are pleased to see it used. But the name of the game is you take care to acknowledge the source of your information and link back to it. Hannan knew (or should have known) the source of the material as we sent him back a link to the original piece we had written, which quite obviously pre-dates Devil's Kitchen.

Furthermore, while Hannan, from his lofty position at the heart of Europe – on his lofty salary – has just woken up, this was an issue I was exploring with some alarm in 2001. This stems directly from the commission's White Paper on European Governance, as I pointed out in an earlier post dated 25 October.

In 2001, I wrote an analysis of that paper, but one of my mistakes was to do it in the name of Farage when it was published by the Bruges Group. He did not really understand its significance, and I doubt whether Hannan even read it (just as he has never read The Great Deception) – he is far too grand to soil his magnificent brain with such "trivia". Had he done so, he might have learned something, which would never do.

So often, we attract criticisms for pursuing our own independent line, and not falling in with the group-think, but more often we are ahead of the game. I think it is fair to say that our blog has a higher proportion of original material and research than any other in the British blogosphere. Unlike Hannan, we do not get paid for our work, and our only gain is the recognition that we are providing a service to the cause.

For that, we rely on fair play from the people who use our information – and at least some of our fiercest detractors at least do acknowledge our material when they attack it. But Hannan, whom we are told is a friend and ally to the cause, whom we should support, clearly feels himself under no such obligation.

Is it really surprising that, occasionally, we take a jaundiced view of the man? With friends like him, who needs enemies?