The sins of the euro 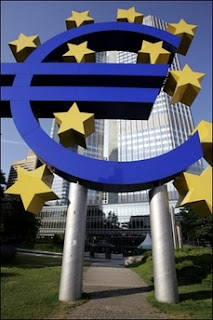 Ambrose Evans-Pritchard picks up in the business section of The Daily Telegraph the extraordinary information that the ECB is pouring aid into Spanish banks to the extent that it matches the Rock rescue effort.

We wrote about the dire state of the Spanish economy earlier this month, based on a Financial Times report and now Ambrose adds to this. He tells us that the Spanish banks are issuing mortgage securities and asset-backed bonds on a massive scale to park at the European Central Bank, using them as collateral to raise money at favourable rates from the official credit window in Frankfurt.

From the rating agency Moody, we also find that lenders had issued a record €53bn (£39bn) in the fourth quarter, yet almost none of the securities have actually been placed on the open market. Most have been sent directly to the ECB for use in "repo" operations.

Ambrose cites Sandie Arlene Fernandez saying: "The market has shut down. Few, if any, of the transactions in the RBMS market (mortgage securities) have been placed since September. Some of the banks are hoping that the market will open up again but most are just preparing these deals to use as repos, which they can do since the ECB accepts AAA-rated securities."

With the total volume of securities issued since the credit crunch began to bite in July having reached €63bn, it seems that only the ECB is keeping the mortgage sector afloat. The data, adds Ambrose, appear to confirm suspicions that the EU authorities have carried out a covert rescue of the Spanish mortgage banking system. It may equal the taxpayer rescue of Northern Rock in Britain, and possibly exceed it in proportion to the overall size of Spain's economy.

Unlike the Rock episode – where Mervyn King thought he had to be out in the open because of EU rules – the difference here is that the ECB rescue operation in Spain has been disguised. Writes Ambrose:

A veiled method is necessary since the eurozone lacks a clear-cut lender of last resort. The IMF has warned that this gap in the architecture of of the single currency could prove serious in a crisis. Traders say the Spanish authorities are quietly turning a blind eye to use of the ECB window, and in some cases may be encouraging banks to go to Frankfurt - a claim denied by the Bank of Spain.

However, we then get David Owen, Europe of Dresdner Kleinwort, who says Spain could face serious difficulties this year as the excesses of a decade-long boom finally catch up with the country. He says:

The size of the Spanish corporate sectors financial deficit is truly is really scary. It rose to 14.5pc of GDP in the third quarter of 2007 from 10pc in the first quarter. This must be a record for a relatively large economy. Clearly this is not sustainable. Cost imbalances have a nasty habit of unwinding, quickly and very painfully.

And guess what! Mr Owen said Spain was acutely vulnerable since it cannot cut interest rates or let the currency slide to cushion the downturn. "Several years of no growth could now beckon. It will be very difficult for the economy to pick itself up again inside EMU," he add.

Well, it may not be headline news, but Spain in definitely in the mire. And, if the euro cannot be blamed for all its woes, it certainly is not helping.