We are moving into a dark time 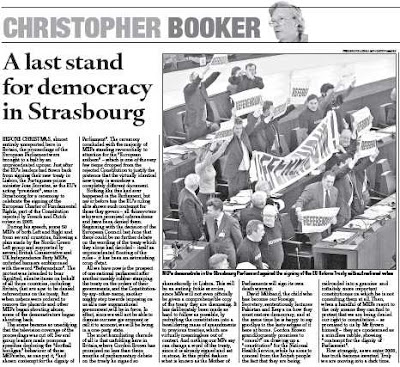 When we started this blog, way back in 2004, there was definitely a point to it. On the back of Tony Blair’s announcement, we were looking to fight the referendum on the EU constitution, with every expectation of winning a "no" vote.

With the EU constitution back, under the disguise of the Lisbon Treaty and with no referendum in sight – and no expectation of one, things look very different. The battle is not finished, of course – it never is and never will be until we've won. And we only have to win once. But that does not dissipate the gloom.

Booker, in today’s column, sums up our mood. He writes:

Before Christmas, almost entirely unreported here in Britain, the proceedings of the European Parliament were brought to a halt by an unprecedented uproar. Just after the EU's leaders had flown back from signing their new treaty in Lisbon, the Portuguese prime minister Jose Socrates, as the EU's acting "president", was in Strasbourg for a ceremony to celebrate the signing of the European Charter of Fundamental Rights, part of the Constitution rejected by French and Dutch voters in 2005.

During his speech, some 50 MEPs of both Left and Right and from several countries, following a plan made by the Nordic Green Left group and supported by several British Conservative and UK Independence Party MEPs, unfurled banners emblazoned with the word "Referendum". The protest was intended to bear dignified, silent witness on behalf of all those countries, including Britain, that are now to be denied referendums on the treaty. But when ushers were ordered to remove the placards and other MEPs began shouting abuse, some of the demonstrators began shouting back.

The scene became so unedifying that the television coverage of the proceedings was cut off. Several group leaders made pompous speeches deploring the "football hooligan" behaviour of those MEPs who, as one put it, "had shown contempt for the dignity of Parliament". The ceremony concluded with the majority of MEPs standing reverentially to attention for the "European anthem" - which is one of the very few items dropped from the rejected Constitution to justify the pretence that the virtually identical new treaty is somehow a completely different document.

Nothing like this had ever happened in the Parliament, but never before has the EU's ruling elite shown such contempt for those they govern - all those voters who were promised referendums and have been denied them. Beginning with the decision of the European Council last June that there could be no further debate on the wording of the treaty which it alone had decided - itself an unprecedented flouting of the rules - it has been an astonishing coup d'etat.

All we have now is the prospect of one national parliament after another meekly rubber-stamping the treaty on the orders of their governments, and the Constitution-by-any-other-name, another mighty step towards imposing on us all a new supranational government, will be in force. In effect, since we will not be able to dismiss our new government or call it to account, we will be living in a one-party state.

The most humiliating charade of all is unfolding here in Britain, where Gordon Brown has promised no less than three months of parliamentary debate on the treaty he signed so shamefacedly in Lisbon. This will be an entirely futile exercise, since MPs will not even officially be given a comprehensible copy of the treaty they are discussing.

It has deliberately been made as hard to follow as possible, by redrafting the constitution into a bewildering mass of amendments to previous treaties, which are virtually meaningless out of context. And nothing our MPs say can change a word of the treaty, since it is already signed and set in stone. In this pitiful fashion what is known as the Mother of Parliaments will sign its own death warrant.

David Miliband, the child who has become our Foreign Secretary, sententiously lectures Pakistan and Kenya on how they must restore democracy, and at the same time he is happy to say goodbye to the last vestiges of it here at home.

Mr Brown grandiloquently promises to "consult" on drawing up a "constitution" for the National Health Service, while he aims to conceal from the British people the fact that they are being railroaded into a genuine and infinitely more important constitution on which he is not consulting them at all.

Then, when a handful of MEPs resort to the only means they can find to protest that we are being denied our right to consultation - as promised to us by Mr Brown himself - they are condemned as a mindless rabble, showing "contempt for the dignity of Parliament".

How strangely, as we enter 2008, has truth become inverted. Truly we are moving into a dark time.

Perhaps it is just the gloom of winter and things will look better in the Spring. But somehow I doubt it.