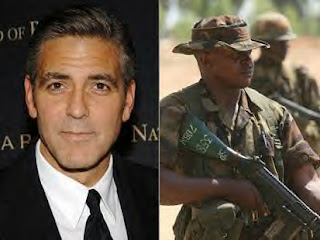 Somehow, I have never been able to take George Clooney seriously even as a cinema actor. Possibly, that is because the only one of his films I managed to watch right through (I was in an aeroplane above the Atlantic but even that is a poor excuse) was “Intolerable Cruelty”. It was bad.

Prettyboy Clooney was completely unbelievable as the ultra-smart divorce lawyer who could out-run and out-gun anyone until love found him in the shape of Catherine Zeta-Jones (OK, you guys, here are some pictures of her – this is an equal opportunities blog). Sadly, there was zilch chemistry between the two and I have never wanted to see another George Clooney film again.

In particular, I have always despised Clooney as the political activist. His idea of courage – I kid you not – is to make an anti-McCarthy film as if there had not been a few self-glorifying films of that kind in Hollywood before. In any case, “Good-night and good luck” is a pack of lies. All those “innocent victims” were Communist agents, some merely of influence, some actual providers of information, like Laurence Duggan, found conveniently dead under his office window when the investigation came too close, the supposed “innocent victim” of the film.

Now Georgy-Porgy has found another outlet for his ultra-fashionable left-wing views: SecGen Ban Ki-Moon has appointed him to be the UN Messenger of Peace. If one needed an example of the preposterousness, nastiness and complete idiocy of the UN, this could be it.

A Messenger of Peace, eh? Was there not one in the Bible already? As one of the commenters on Libertas asks, did Jesus Christ resign or retire? Did we all miss the news?

The best and angriest comment on the subject is, predictably, by the admirable Claudia Rossett, who still has not been given the Pulitzer Prize for uncovering all sorts of skulduggery in the UN.

This would all be great if UN peacekeeping actually produced peace. But the illusion that the UN is a grand force for good in this world deserves to be catalogued somewhere between World’s Most Amazing Scams and Believe It-Or-Not Best-in-Special-Effects. The reality of today’s UN is more like a cross between “Animal House” (the movie, with John Belushi) and “Animal Farm” (the book, by George Orwell). Libya and Vietnam have just joined the Security Council, where China and Russia hold permanent seats. The Organization of the Islamic Conference has turned the General Assembly into its Manhattan clubhouse — which Iran’s mushroom-cloud-in-chief Mahmoud Ahmadinejad now uses every September as a base to parade around New York and lecture his audiences that Iran is a country of peaceful intentions and no homosexuals.

Nor does she forget those wonderful peacekeeping UN troops that will be His Peacefulness Clooney’s “special focus”:

In UN peacekeeping, which will be Clooney’s special focus, peacekeeper sex scandals continue to bubble up, with their own special focus on under-age locals the peacekeepers are supposed to be protecting (almost three years after the UN declared a zero-tolerance policy for such outrages). Peacekeeping has been one of the major areas of UN corruption, with even the UN itself finally acknowledging hundreds of millions worth of tainted contracts.

We have said it before and we shall say it again: the only genuine peace-keeping force in the world are the US Marine Corps, closely followed by the US Army. All else is for the birds.

Just as I cannot take Georgy-Porgy Clooney seriously, so I cannot share Ms Rossett’s anger. I should, I know, and I often do when it comes to the UN or the World Bank. But the sight of G-P Clooney pratting round carefully controlled and secured so-called war zones in fetching uniforms and helmets, dispensing fatuous and predictable comments merely makes me laugh. The whole notion of idiot film stars as UN Messsengers of Whatever is completely ludicrous and entirely appropriate to that ghastly organization.

I was going to say it all adds to the gaiety of nations but the last time I did so I was ticked off severely by a reader who was completely unimpressed by my frivolity. Oh what the heck – it does add to the gaiety of nations. And it might just bring nearer the day when that prime piece of real estate in Manhattan is reclaimed from the crooks and tyrants whose representatives infest it.
Posted by Helen at 01:14