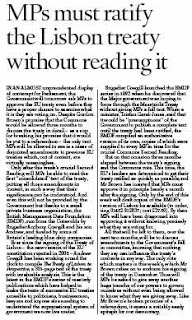 Rather confirming our premise that the forthcoming ratification debate in the Commons will be about anything and everything but the constitutional Lisbon treaty itself, Booker writes in The Sunday Telegraph that the MPs will be required to ratify it without reading it.

Specifically, they will have sight of the amendments to the existing treaties – which forms the basis of the Lisbon treaty – but, as readily acknowledged by former Italian prime minister, Giuliano Amato, this document is unreadable, and quite deliberately so.

The only way it can make sense is if all the amendments are amalgamated into the existing texts, to produce a publicly available consolidated treaty. This is something which neither the EU officials nor the government have done, for very obvious reasons.

Should they do so, it will then become readily apparent that the differences between the final document and the EU constitution are so marginal that, to all intents and purposes, they are the same. But we have known this for months anyway.

Fortunately, Booker tells us, there will be a consolidated version available, produced by a small private business organisation, the British Management Data Foundation (BMDF), run from the Cotswolds by Brigadier Anthony Cowgill and his son Andrew, and funded by some of Britain's leading blue-chip companies.

Unfortunately, draft copies of this version will not be available until the end of this week (to order, ring 01452 812837; cost £27.50), after the second reading debate. Thus will MPs be asked to give away another huge tranche of our powers to govern ourselves without even being allowed to know what they are giving away. "Like Mr Brown's broken promise of a referendum," Booker writes, "it seems a suitably seedy epitaph for our democracy."