The wages of (in)equality 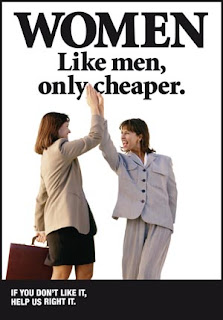 Offered in The Times is the ultimate story of good intentions gone sour, this being the effect of the EU's equal pay regime.

The process started with the Treaty of Rome was the subject of formal legislation in Council Directive 75/117/EEC of 10 February 1975 on "the approximation of the laws of the Member States relating to the application of the principle of equal pay for men and women".

It was subsequently expanded through the decades, amplified by ECJ judgements and finally culminated in Directive 2006/54/EC of the European Parliament and of the Council of 5 July 2006 "on the implementation of the principle of equal opportunities and equal treatment of men and women in matters of employment and occupation (recast)".

And now, chickens are coming home to roost, with The Times headlining: "Town hall strike threat as men face equality pay cuts", then retailing that public sector unions are threatening strike action over equal pay deals for council workers after proposed cuts of up to £35,000 for thousands of male staff.

Unison and Unite, the largest public sector unions, are balloting members in Birmingham over industrial action because nearly 5,000 staff face salary cuts to fund rises for low-paid women. Birmingham City Council, the biggest authority in the country, with 60,000 staff, will prove a test case for other council employers, where town halls are trying to reach similar equal pay agreements.

Says The Times, the national bill is estimated at £3 billion to cover salary rises for 700,000 women, including back pay of up to six years after an EU directive in 2003. Although some employers have struck deals with unions, many are now facing legal challenges from no-win, no-fee lawyers seeking better terms for women.

Therein lies the problem for, while the government, unions, Uncle Tom Cobley and all are in favour of equal pay for women, our provincial government has neither the means nor any intention of funding pay raises to meet the EU legislation. Therefore, in order to increase the pay of women workers, to equalise their pay, the salaries of other workers are going down.

What really brings the piece alive, however, are the online comments. One writer points out that, in Nottinghamshire, it is not higher paid professional and managerial staff who face pay cuts to fund equal pay. "Even admin staff on salaries below £14,000," we are told, "are facing reductions of £1-2,000; of course these are mainly women." Is this, "Robbing the poor to pay the poorer?" we are asked.

Another writer adds that his wife has worked for Nottingham County Council for 22 years and has had her pay reduced by 25 percent from £20k to £15k to fund this so called equal pay. In fact, he says, 56 percent of those salaries reduced in Nottingham are women.

Of course, if we had an opposition, there could be mayhem about this obvious injustice … to women. But hey! The Tory party (whose poster is shown top left) is in favour of equal pay – or is it unequal misery?