Do we have an unelected Prime Minister? 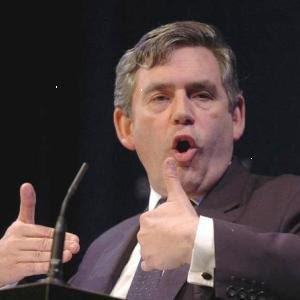 Time for another little constitutional discussion, methinks. I yield to no-one in my dislike, distrust and contempt for Gordon Brown, our Prime Minister and erstwhile Chancellor of the Exchequer. Indeed, I have always maintained - and there are witnesses to this - that he was a failure as a Chancellor, a complete loser and, most importantly, not a eurosceptic or even someone who was genuinely interested in keeping this country out of further EU entanglement, such as the euro.

I recall numerous heated and, as ever, rather ill-phrased discussions on the forum with readers who maintained that I was wrong and shall see the error of my ways as soon as Gordon becomes PM. I have heard no acknowledgements that these people were wrong but let that pass.

Now we have rumours that he is plotting to take us into the euro, presumably without any intention of holding that promised referendum. He may find that a good deal more difficult than he imagines, if the rumour is true, which it may not be.

He is certainly a man who has little understanding of economic forces or political integrity. But is he unelected? Well, actually, no.

As any schoolchild used to know, we do not have a presidential system and we do not elect prime ministers directly. There are many problems with the system we have in which the legislative and the executive are elected simultaneously because that prevents a genuine separation of powers that, in turn, means there are no real checks and balances. However, that is the system we have.

This means that we actually elect a party to form the government and it is up to that party to decide who should be the leader. Gordon Brown is no more unelected than Churchill was in 1940, Eden in 1955, Macmillan in 1957, Douglas-Home in 1963, Callaghan in 1975 1976 or Major in 1991 1990. Of these only Eden went to the country almost immediately and strengthened the mandate. The others continued in their position without an election for as long as possible. (Clearly, Churchill was an exception in that there could be no election in war time, though the Americans managed one in 1944.)

In a dim sort of way Brown understands this as he spoke of the mandate he had last autumn. Rather stupidly (and I suspect that the man is not very bright) he did not follow it through and point out that he had a mandate to carry on being a prime minister and did not need to go to the country as we, on this blog, knew he would not. Instead, he prevaricated wanting to harm the opposition more than strengthen his own position and failed in both.

We have always maintained that whether one liked Tony Blair or not, whether one agreed with his actions or not, he, being the elected prime minister or, in other words, the chosen leader of the party elected to form the government of the country, had every right to do certain things. It is he who was constitutionally empowered to take this country to war not the people who bothered to turn up for whatever reason for a demo on a fine Saturday afternoon.

In the same way, whatever one may think of Gordon Brown, one has to admit that he is the rightfully elected prime minister of this country. The problem is that the mandate that gives him that right also includes a certain assurance that there would be a referendum on the Constitutional Reform Lisbon Treaty.

PS It was pointed out to me after the original posting that I made a mistake over two dates. Mea culpa. I have now corrected the mistakes, resisting the temptation of a stealth edit.
Posted by Helen at 10:54