"Give me liberty or give me death" - Part I 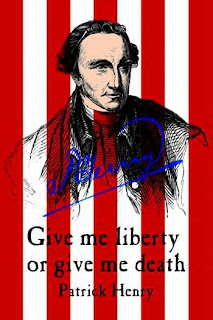 These ringing words end the speech made by Patrick Henry on March 23, 1775. He was addressing the House of Burgesses, the legislative House of the Colony of Virginia and calling for military action against British troops. As the Wikipedia article points out, the words of the speech remain problematic as they were not noted down at the time.

After the War of Independence (or the third English Revolution) Patrick Henry was involved in the debates about the Constitution, at first as an Antifederalist but later as a staunch Federalist, being, apparently, one of the moving forces behind the Bill of Rights, which became the first ten Amendments to the Constitution and which we badly need in this country.

All the while Patrick Henry was a slave owner even though he recognized the contradictions in his stand. Possibly he even recognized the contradictions in his stand on liberty and calls for a strong federal government, though one could argue that as long as the government is controlled by well-defined states’ and individual rights, problems are less likely to arise. How wrong that argument would be can be seen in America’s own Civil War or War Between the States.

This is not, our readers will be glad to know, a posting about American history or even the American presidential elections. The latter will have to be discussed some time but, as St Augustine said in a different context, not yet.

Rather, I should like to muse a little on questions of liberty, freedom of speech, censorship and editorial control. Some readers may want to stop here and go no further. They are welcome to absent themselves.

The first part of a long posting is on EU Referendum 2.