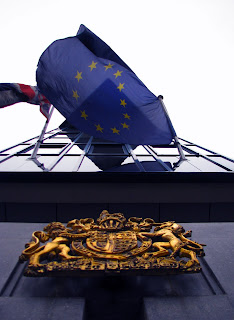 One can only applaud the latest initiative by Open Europe, with a high profile story in The Daily Mail headed, "Britain has signed 'blank cheque' to EU as 31 powers under treaty are yet to be negotiated".

The story is based on a press release produced by the organisation which states that "the full extent of the powers being handed to Brussels under the new European treaty are still to be finalised", with details gleaned from a "confidential EU paper" obtained by Open Europe.

The leaked document identifies 31 areas of the Lisbon Treaty where working arrangements are not in place. The list includes the powers of a new EU diplomatic service and the extent of co-operation on defence.

Neil O'Brien is cited in the Mail piece declaring that, "Much of the Lisbon Treaty is about giving the EU the power to create new institutions and arrangements and to decide on how they will actually work in practice at a later date," adding, "Many of these crucial decisions will be made by majority voting, so the UK is unlikely to be able to stop any details it doesn't like the look of. Once the treaty is ratified, there'll be no going back."

There are so many deliberately unanswered questions in there - about things as important as the role and powers of the EU president and foreign minister - that MPs would effectively be signing a blank cheque to the EU if they ratify this treaty without a referendum."

The details are useful but, as our own readers would doubtless agree, the underlying thrust is by no means new. Treaties are part of a process and the ratification of a new treaty is never an end in itself but merely a step which facilitates the next tranche of integration. Even now, the EU is still putting in place measures which rely on the Maastricht treaty and even the original Treaty of Rome.

This then, gets to the nub of the issue and it is encouraging to see O'Brien catching up with the reality of European political integration. But where he still has not caught up is in his acceptance of the EU's own terminology, with his reference to "new institutions".

As we pointed out some time ago, the very use of the word "institution" is one of those brilliant deceptions of the "colleagues", bordering on genius, which enables them to hide their intentions in plain sight. Only once you replace the word with "government" and you realise that "institutional reform" actually means "strengthening the power of the EU government" do things fall into place.

Thus, what Open Europe has found out is that, armed with their new treaty, the "colleagues" are now all set to use the powers they have been given to strengthen their government, cementing its position further as our central and supreme government.

The failure clearly to understand and acknowledge this has dogged the debate on the treaty, which has so often got bogged down in detail, obscuring that main and all-important issue.

This is also where those who so loosely use the term "superstate" go wrong. One can have endless discussion about the meaning of the term "state", bordering on the theological, but the essence is that the EU is not a state and has no ambitions to become one. It is a government detached from the ownership of territory and its ambitions are to become a "super-government", ruling over all the states of Europe.

One would like to think that Open Europe, with their latest work, are a step closer to understanding this, but it will be difficult for them. The basic inconsistency in their position is that they still project the view that it is in some way possible to reform the European Union, turning it into a construct more to their liking.

But the inevitable conclusion to be drawn from their own findings is that this will never happen. The "colleagues" are not interested in Open Europe's ideas. Their only agenda is the accretion of more power until they have gained their ultimate objective, the status of that supreme government of Europe. The sooner this is recognised, the sooner the pretence that "reform" is an option can be abandoned and we can then all start concentrating on looking for an exit.