You think we've got problems 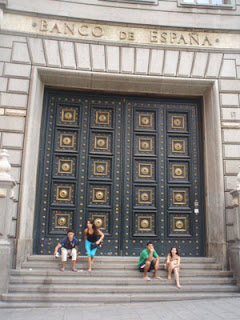 The deteriorating economy in the UK may be of considerable concern but, it seems, troubles are multiplying in Spain to a very much greater extent.

Only last September, the Finanical Times reports, José Luis Rodríguez Zapatero, the Spanish prime minister, announced that Spain had joined the "Champions' League" of world economies. Europe's fifth largest economy was growing so robustly, and creating so many jobs, it would soon be richer than Germany in per capita terms, Zapatero predicted.

That euphoria, we are now told, "was short-lived". December saw a spike in inflation, a rise in unemployment and a slowdown in the economy, as the international credit squeeze gripped Spain. The government has recently lowered its estimate for economic growth in 2008 from 3.3 percent to 3.1 per cent, a figure many economists consider is still too optimistic. Inflation last month of 4.3 percent was at the highest level in more than a decade.

And that, it appears, is only the start of the problems. Spain is also in the grip of a housing market collapse, with house prices in many parts of the country falling. Some families are now trapped by negative equity.

Unlike Gordon Brown, however – who has over two years to weather a financial storm before a general election – Zapatero is facing his on 9 March and the signs do not look good for his Socialist party.

The FT tells us that the mood is especially sombre in provincial towns such as Igualada, a prosperous textile and leather manufacturing centre near Barcelona in the north-east. It cites the branch manager of a regional savings bank who says, "I've been a bank manager for 28 years and I have never lived through a situation as dramatic as this … House prices in this town have fallen by 20 percent, there is no demand, and no mortgage finance. Savings banks have cut off funding. Before the credit crunch, I used to do 12 mortgages a month. Since August, my branch has approved only one new loan."

The unnamed manager says that for the first time, clients are handing in the keys of their homes and walking away from their debt problems. "With the fall in house prices, families are giving up. They don't see the point of struggling on with their mortgage payments." Repossessions, he says, are on the rise.

And there is something that is very familiar here. In Madrid, the Bank of Spain (pictured) insists that the lending business remains sound. But in Igualada, bank managers of regional and national savings banks say that official statistics are not telling the full story. For instance, developers in Spain raise bank credit on the basis of the down payments they receive. "In an environment of falling house prices, we have no way of knowing how many units have actually been sold, or how many sales will fall through," says one banker.

One thing that is not mentioned, however, is the effect of the euro. With tight credit, Spain desperately needs an easing of the interest rate. But, as long as the ECB (with strong German pressure) is holding on to inflation as the main enemy, this is not going to happen. One size most definitely does not fit all.